F1 Quals: Brazil 2011 The year was 1991.  Operation Desert Storm liberated Kuwait from the Iraqi military.  The New York Giants beat the Buffalo Bills in Super Bowl XXV.  Boris Yeltsin was elected President of Russia.  Red Grange passed away.  Mount Pinatubo erupted, killing 800.  The first Sonic the Hedgehog game was released by Sega.  The Warsaw Pact came to an end.  Danny Thomas passed away.  Jeffrey Dahmer was arrested.  The Super Nintendo was released.  Linus Torvalds first reveals the Linux kernel on Usenet.  Rajiv Ghandi was assassinated by the Tamil Tigers.  The Minnesota Twins defeat the Atlanta Braves to win the World Series.  The Halloween Blizzard catches a Grad School student named Wonderduck by surprise.  The Soviet Union officially dissolved.  Freddy Mercury, Dr Seuss and Gene Roddenberry all pass away.  And a 21 year old Brazilian named Rubens Barrichello starts his first Formula 1 race.  In 1992, the very next season, Nigel Mansell set a record earning 14 pole positions in that season.  Today, Rubens Barrichello may be qualifying for his final Formula 1 race, and Seb Vettel has a chance to break Mansell's record.  But did he?  Let's look at the provisional grid for the 2011 Grand Prix of Brazil:


It wasn't even close.  Not only was Seb Vettel the only driver to break 1:12.000, his 1:11.918 time was only a half-second off the Interlagos course record.  That time was set in 2004, when the cars had unrestricted V10 engines and could have all manner of bargeboards and winglets to increase downforce.  Further, a tirewar was in progress between Michelin and Bridgestone, thus providing wildly grippy (though grooved) tires.  So yes, Seb Vettel blew the field away with a lap that looked like he was on rails.  Everybody else, even his teammate Mark Webber, seemed to be having problems with grip, sawing at the steering wheel to correct and recorrect their paths through turns.  On the other hand, Vettel's pole lap looked like he was just on a casual drive through the country.  Amazing, simply amazing.  We've seen something here today we may never see again, unless Vettel happens to the 2012 season as well.

As far as the race tomorrow goes, there's a high expectation of rain during the race.  If that happens, it's a crapshoot as to who'll win.  No way I'd bet against Vettel though, no matter the weather conditions. 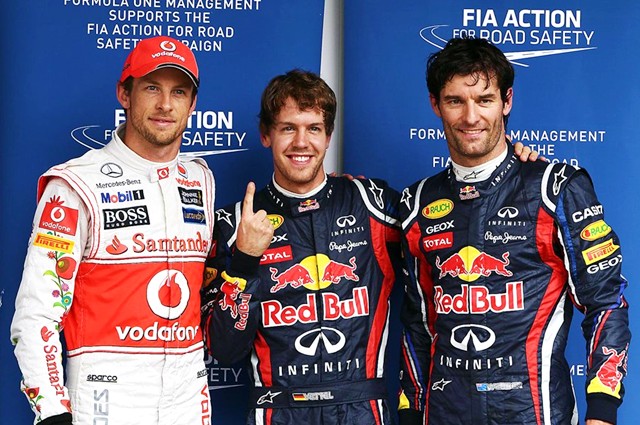 I hope he appreciates what's going on.  The race is Sunday, see ya then!

3 In my defense, the Legendary Announce Team said more than once that it was "20 years ago" that Mansell set the record.  That'll teach me to listen to Hobbes.

It's to Vettel's credit that he isn't letting go. He's still driving every race as if it matters -- and that's how it ought to be.

6 Vettel has 11 wins this year, with the possibility of a 12th today. Would that also be a season record?

7 Sorry, Steven, I didn't see this question until Monday night.  The single-season win record is 13, held by Slappy Schumacher.  He set it in 2004, the first year I began paying attention to F1.