F1 Quals: Austria 2017 Well folks, they can't all be gems... my Austria/Australia post proved that one definitively.  And so too went today's Qualifying session for the 2017 Grand Prix of Australia Austria.  Here's the provisional grid:


So yeah, not much exciting today.  We didn't even get the usual shootout for pole, the drivers making one last desperate dash in an attempt to best the leader's time.  Lettuce Grosjean's Haas turned into an immobile piece of carbon fiber sculpture on the racing surface towards the end of the session.  That brought out the yellow flags, meaning that drivers couldn't improve their times (by rule).  And thus we did see Valterri Bottas take pole by a scant .042 seconds over Sebby Vettel.  Lewis Hamilton qualified third, but he's going to starting from the eighth spot after an unscheduled gearbox change.  Whoopsie!  However, he's taken advantage of that by doing his runs in Q2 on the harder "super-soft" tires while everyone else of consequence used the "ultra-softs".  In theory, this'll lead to him doing a long first stint and running the faster tires at the end... strategery!

Except all of that skullsweat might go right out the window.  There's a good chance of rain for tomorrow's race, and it's almost guaranteed to be raining before the race session.  Damp track?  Rain race?  I'm up for that!  Cross your wingtips, lads and lasses, and keep 'em crossed.

Race on Sunday morning, we'll be along with the F1U! sometime after that.  See ya then! 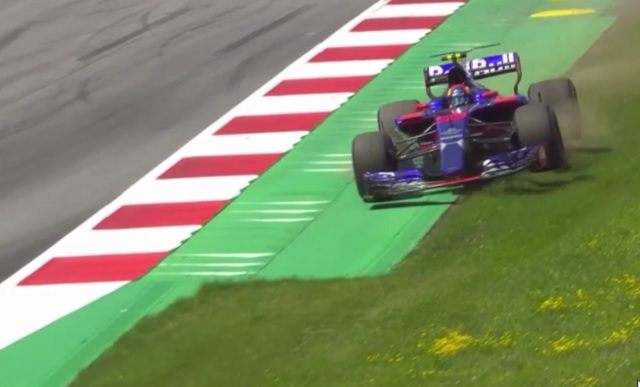 1 Did you see the post-race interviews where Hamilton and Vettel refused to shake hands? Things are getting interesting...

Also, what the hell was Max doing out there???

2 Yeah, I did see the post-session, and honestly, that bit is overblown to the point that I think the media is trying to make more of it than there really is.  Oh, I'm not claiming they're BFFs or anything but...  here's video of them shaking hands after quals but before the interviews, and here's a nice clear still picture of the moment.