F1 Quals: Austria 2016 It is uncommon these days for my life to be so busy that I actually forget things like lunch dates or important to-do's.  Yet that is exactly what happened today here at Pond Central.  In fact, it wasn't until I was tucking into my plate of sausage-stuffed giant rigatoni at Olive Garden that I realized: I had completely forgotten about today's Quals!  Reacting immediately, I mentioned to my folks "huh, I forgot about quals," and had myself another spoonful of zuppa toscana and a breadstick.  I eventually made my way home, sat down to watch quals and promptly dozed off in my chair.  Once I woke up a few minutes later, I got myself to the computer desk to write this and found myself getting constantly distracted by things like this, or like this, or particularly like this.  To the point that it's now a very long time indeed since Quals, or even since I came home from lunch.  What I'm trying to say is that here's the provisional grid for the 2016 Grand Prix of Austria:


Well, okay you say, big deal, just another Merc 1 - 2, hey?   Well not so fast there, Binkey!  Both Nico Rosberg and Seb Vettel had to change gearboxes meaning they take five-grid-spot penalties... which ALSO means that Force India's Nico Hulkenberg will be starting second, and Jenson Button's McLaren will be third!

As the late great Mel Allen used to say, "How about that?"  (oops, got distracted again)

Down towards the bottom, we find Carlos Sainz, Sergio Perez and Kid Kvyat, all three of whom snapped their suspensions like dry twigs running over the... shall we say "aggressive"?... curbs at the Red Bull Ring.  There's been a lot of that this weekend... Rosberg's gearbox change is a result of his left-rear suspension breaking, and I know it happened to a few drivers in Practice 1 as well. 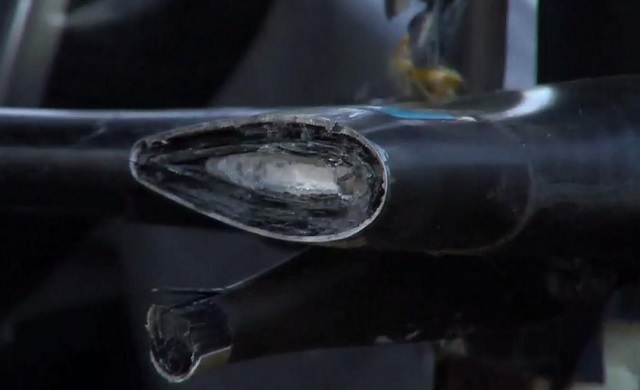 That's Rosberg's suspension at the point of failure.  Pretty clean snappage right there... and that's the thing about carbon fiber: it's remarkably strong right up to the moment it isn't anymore, at which point it breaks like a dry saltine.  Metal may be heavier, but it usually bends before it breaks... which is probably why suspensions were the last thing to change to carbon fiber in a F1 car design.

Well, it should be a race tomorrow.  There's even a chance of rain, which'll throw the ducks amongst the rye bread, that's for sure.  See you then, maybe!

Hulk starting in second place? Awesome! (I've got a soft spot in my heart for Force India; I want them to do well.)

2 Mmmm, zuppa toscana. I can take or leave anything else at OG (the breadsticks... ain't what they used to be...) but I love that soup.

3 I can confirm the breadsticks are different.  I don't know what the change is, but they aren't anywhere near as tasty as they once were.

The zuppa toscana though... nom

4 That RWBY AMV link caused me to spend an hour watching that and the related ones.  Thanks!

5 OG seem to have tried to mask the drastic lowering in quality of the bread itself by slathering on more and more butter & garlic salt.

It isn't working. Those sticks are just gritty and doughy now.

I mean, go ahead and laugh at my lamenting the loss of OG bread sticks as a tasty treat, but dammit.