F1 Quals: Abu Dhabi 2014 Pretty much perfect weather for today's Quals at Yas Marina Circuit in Abu Dhabi.  Tomorrow's race will decide which of the Merc pilots will win the driver's championship!  Who are you backing?  Is it Lewis Hamilton, 2008 driver champion, and leading this one?  Or is it Nico Rosberg and his consistently good finishes and ten poles?  Who gets the advantage for tomorrow?  Let's look at the provisional grid:


Rosberg scores his 11th pole of the season, and at least has a small advantage going into tomorrow race.  Now all he has to do is win and hope Hamilton finishes third or worse... he needs help, in other words.  Still, advantage Rosberg.

The huge elephant in the room, obviously, is the two Red Bulls being disqualified from Quals.  They were reported to the stewards for having a front wing that had been designed to flex under loading, which means it's a movable aerodynamic device.  Tricky, but against the rules.  They've accepted the penalty, while saying "we're disappointed that we're getting penalized while other teams are doing the same thing."  Of course, all front wings move a bit as downforce comes on, but Red Bull's were really pushing it.  I'm not impressed by their reaction; essentially it boils down to "Whaaaaaaaaaaaaaaaaaaaa, you're picking on us!"  Which, to be fair, has been their reaction to such things in the past as well.  The two Red Bull drivers will start from the back of the grid.

In other news, hey look!  It's Caterham!  They managed to sucker enough F1 fans into their crowdsourced funding project to get to the grid, and thereby earn 10th place and a cut of the prize money despite not actually having earned it!  Even better, all that prize money will likely go right to creditors when the team folds after the race.  There are Caterham staff who reportedly haven't received back pay from two months ago, and over 200 employees were let go a while ago.  I do hope the mechanics at Abu Dhabi were paid in advance.  I also hope the cars are safe... at Russia, Gandalf Kobayashi tweeted that the team had repaired a broken carbon fiber suspension piece by wrapping it up with a carbon fiber sheet.

Finally, in the world of ridiculous penalties, Lettuce Grosjean has received a twenty grid-place penalty.  He's using his sixth engine, turbocharger and MGU-H (Motor Generator Unit - Heat, which converts exhaust heat to electrical power as part of the KERS unit) at Abu Dhabi, meaning he gets a 10-spot for the engine, and 5-spots for the other two.  Since he can't actually start from 36th on the grid (that would put him roughly halfway across the Al-Mafraq bridge), he's going to have to serve a ten second stop-go penalty during the race while starting... um... well, I'm not sure where he'll be starting.  He'll either be 18th, just before the two Red Bulls, or 20th, behind them.

Race is in the morning, F1U! thereafter.  See ya then! 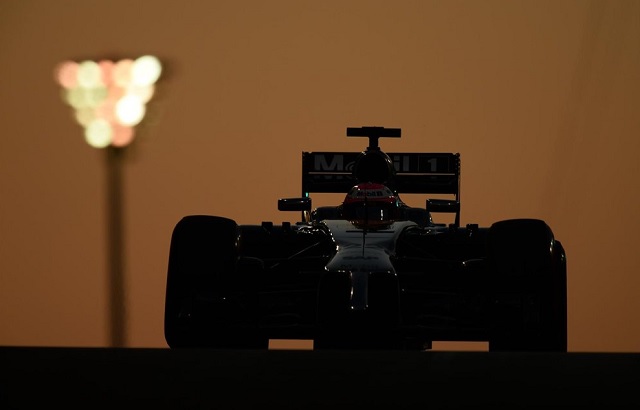 You asked us who we favor? I favor Hamilton, because I want him to prove that his decision to leave McLaren was a good one. For him to win the Driver's Championship in his first season with Mercedes would be a huge slap in the face of McLaren, especially considering how poorly they've done this year.

(I notice that you stopped calling him "Shiv" quite a while ago.)

2 I notice that you stopped calling him "Shiv" quite a while ago.

Got tired of it.  Pretty much all the rest of 'em their nicknames are natural to me, but "Shiv" never stuck, if you'll pardon the pun.

Won't mind if either Rosberg or Hamilton win, so long as it's a nice clean race.