F1 Practice: Valencia 2008! Okay, I'm starting to come around on this new circuit.  Earlier, with just the silent footage to judge from and only one car on course, I didn't find it to be a particularly interesting layout.  After seeing 20 F1 cars whipping around Valencia, however, it's a lot more attractive.  A LOT more.

My first impression of the track being like Melbourne needs to be corrected, too.  If you took the DNA from both Monaco and Montreal, then did some weird gene-splicing experiments (since all other problems in the world have been taken care of), you'd end up with Valencia.  Twisty, curvy, but with some high-speed sections followed rapidly by brutally slow hairpins, and some promising passing areas to boot.  There's some potential here, folks.

Bridgestone brought the soft and supersoft compounds to the party, and it doesn't look like there's going to be any out-of-the-ordinary wear issues (unless you're Nico Rosberg, who at one point flat-spotted his tires so badly after a spin that you could SEE the flat spots as the car was moving at 160mph).  It turns out, however, that the tire manufacturer is somewhat concerned about the bridge, of all things.  It turns out that it's not your usual span, but a swinging bridge that splits in half to clear the way to the harbor, and there's a gap of about a half-inch between the two pieces.  That's fine for your everyday street tire, but for a race tire going at 130-140mph?  There may (or may not) be a lot of blowouts come raceday. 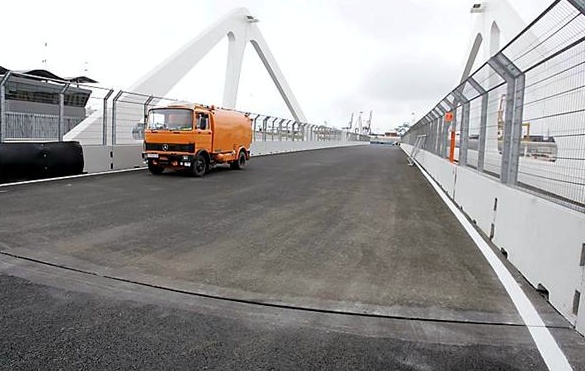 Not the most interesting picture, I admit...
Of course the track was very, very green, and very, very dusty.  Pit boxes had to be swept all day just to allow the cars to have a little bit of traction.  However, as the layout rubbers in, the times will drop.  Nobody seemed to have any real problems learning the circuit, either.

I'm getting excited about this race.  Sure, some of it is because we haven't had a race in three weeks, but I think this circuit promises big things.  Since it's new, I'm going to treat it as if it's a wet race: all bets are off, and nobody knows what's going to happen.  If it actually rains, though, not only are all bets off, but the casino is closed.

Quals Saturday, be here or be somewhere else.

1 I guess there isn't a lot they can do about that bridge, is there? Anything they might lay on top of the gap would only make things worse.

Short of asphalting the crack shut (and some major construction work on the bridge after the race), no, not really.

To clear up a point that I blew completely in the post: the drivers are more concerned about the gap than Bridgestone, though the tire company has publicly said that they're sure the tires will be fine... which pretty much means that they're worried about it.

3 That bridge is between 9 and 10, right? Are they really going to have time to get up to those kinds of speeds in such a short stretch?

4 Actually, I guess they could be when they enter the bridge. They'll have to be slowing down on the bridge for turn 10 on the back end, though.

5 Yes as to the location of the bridge.  However, turn nine isn't much of a turn at all; they'll be taking it with the accelerator planted firmly to the floor.  Moreover, the bridge is at least the length of a football field, perhaps longer.  Plenty of distance for them to be over 130mph.

As far as slowing down for 10 goes, though, there's something that you, Steven, can't know since you've never watched a race: the way these cars can shed appalling amounts of speed.  Using carbon/carbon brakes, instead of steel like NASCAR or IndyCar (?), they may just as well throw a battleship anchor out the back.  From 120mph to zero in under three seconds in about 200 feet.  From 60mph to zero in 55 feet. All of that at up to 5.5g.

6 Actually I did see that in a youtube from Montreal, that camera which was at the tip of the hairpin. The cars came charging in on the right and I remember being surprised at how fast they decelerated before taking the curve.

7 By the way, glad to see you survived Hell-week.

8 Thank you!  It's got a little bit more to go, but the worst is over.  Good thing, too, because I was making some rather dumb mistakes by the end of Thursday (I didn't work Friday, as I was already at 40 hours.  I have no problem with overtime, but the company wants as little as possible).