F1 Practice: Sepang 2008! So you're driving along and you blow a turn, wind up off-track.  Happens all the time.  No big deal, particularly because you're on an asphalt runoff area... you just steer yourself to come back on track as fast as possible.  The only problem, and it's not that much of one, is that there's a curb in front of you.  No sweat. 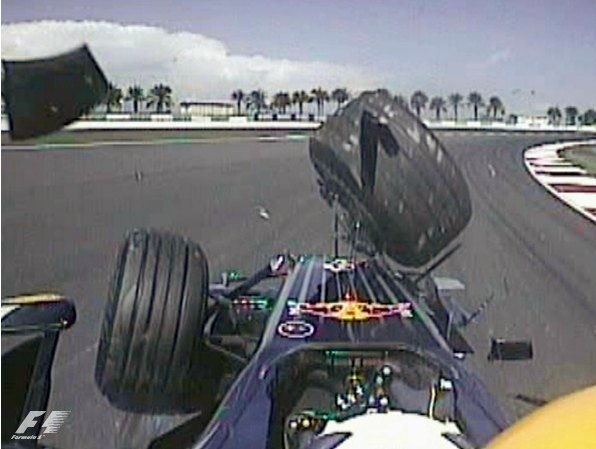 Oh.  Dear.
Except the backside of the curbs at Sepang are, it seems, two feet tall and made of razorblades and C4. 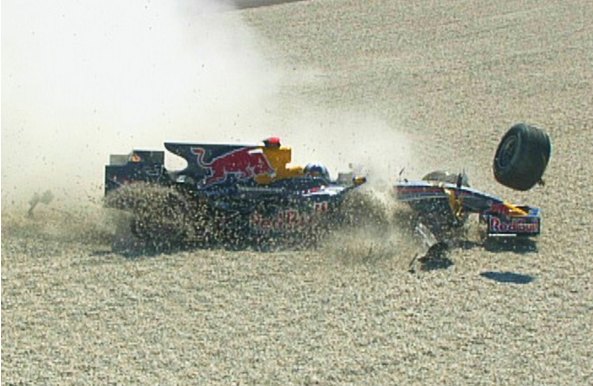 Red Bull Gives Tires Wings.
Officially, David Coulthard's Chin suffered a steering failure.  Yes, having your suspension shatter like a window with a baseball through it could be considered "steering failure."  This could have been a dreadfully serious incident, however, as wheel tethers are not supposed to fail under any circumstances, yet there's a Red Bull right-front flying in a graceful arc away from the scene of the crime.  It wasn't THAT bad of an accident, guys.

The only real news to come out of the practice sessions was that Ferrari engines seem to be having more problems.  Kimi had a shutdown in P1, SeaBass had problems in both sessions (the second of which impressively caused his engine to seize solid), and one of the Farce India cars was ill, too.  That can't be encouraging to Ferrari proper.

Of course Ferrari is denying there's any problem at all.  We'll see, won't we?  The quals are on Saturday, and Lewis Hamilton's McLaren had fast lap of the day, and zero problems on track at all.  This might be getting ugly, and it couldn't happen to a nicer buncha guys than Ferrari.

1 Having a wheel fly away like that is really bad. At speed, it could go a long, long way at very high speed, and hit something or someone hard to enough to cause real problems.

2 The addition of wheel tethers came about in 1994, when Ayrton Senna was killed in a crash.  It may or may not have been survivable (it was pretty rough, but Robert Kubica's in Montreal last year was much worse), but the question became moot when his front-right wheel, with part of the suspension attached, hit him in the head.  One of the suspension pieces punched through the helmet.

That was a miserable weekend.  Senna was the second driver to die that race, the first being Roland Ratzenberger, who suffered a front wing failure; it jammed underneath his car and prevented him from making a turn.  The impact broke his neck, the same way that Dale Earnhart died in 2001.

There probably should have been a third death that weekend.  By some miracle, however, Rubens Barrichello (who was a rookie that year) survived the worst accident of the weekend.  His car hit a curb and got massively airborne, maybe five or six feet.  A catchfence brought the flying car to a very fast halt, then dumped it to the ground upside-down.  He broke a couple of bones, was knocked out, and nearly suffocated when his tongue blocked his windpipe.

Shortly thereafter, though, wheel tethers appeared and the HANS device began to get a lot more attention.

3 I think the wheel is still attached. In fact you can see the two tethers in the video still if you look closely enough. Nonetheless, Stewards of The Meeting have summoned Red Bull officials to prove that the car is not of "dangerous construction". Red Bull may yet be disqualified from Malaysia. But this apparently has to do with the suspension breaking, not wheels flying off.

Pete, in the first picture, the wheel is indeed still attached.  The tethers broke when The Chin went over the second curb on it's way into the kittylitter (pic #2).

This is the second time in two weeks The Chin's Red Bull has suffered explosive suspension failure.  Last week's breaking is understandable, and we've seen it dozens of times before.  This one, though, baffles me.  The Legendary Announce Team suggested that the binding agent that was holding the carbon fibre suspension together failed (instead of the carbon fibre itself), but that was supposition on their part.

Red Bull has been cleared to race, by the way.

I just looked up the HANS device in Wikipedia. That's a nice design! The way it sits on the shoulders and upper chest, and is held in place by the seat belt? Very clean!

I'm sure it takes getting used to, but I'm equally sure it will save lives.

7 Speaking of runaway tires, here's an example.  It's best if you imagine "Yackity Sax" playing while you watch it.

8 That thing really sailed, didn't it? It must have gone a quarter of a mile before it ran into something that would stop it.