F1 Practice: India P1 Liveblog (PRE-SESSION) Hello, namaste and welcome to the second ever F1-related liveblog here at The Pond.  Tonight is our first real glimpse of the new Buddh International Circuit in India.  As with last year's liveblog of the debut of Korea's track, I'll be using time remaining in the session as a reference... if you see 1:15:07, that means there's one hour, fifteen minutes and seven seconds left in P1, not that it's 1:15am.

My broadband connection seems to be running quick tonight, but if last year's liveblog of Korea is any judge, I have the speed to stream video or update the blog... but not both at any given time.  I'll probably be doing two or three entries at a time, just to keep myself from going insane.  Any pictures will be screencaps from the SPEED streaming feed, which you can find right here.

Reports are that the track is very dusty.  Well, yeah, that figures... it's still a construction site.  Some people on-site are saying that not every bathroom has running water, electricity is being provided by generators when it's provided at all, and on and on.  That's as may be, but the asphalt is down, the curbing is installed, and we're going to see a new track!  I fully expect to see the two Indian drivers, Cowboy Karun Chandhok, who's only driving for Lotus in P1, and Narain Kittylitter, who's taking Vitantonio Liuzzi's seat at HRT for this race, out first... both to play streetsweeper and to say "hey, the first official cars on track were piloted by Indians!"  We'll find out soon enough.

?:??:?? - Well, crap.  I'm going to reboot my computer.  I gather the session has been red-flagged anyway, due to stray dogs being on the track.  Force India was the first to get on track, surprise surprise, and Chandhok got the first official timed lap.

?:??:?? - Peter "Smarmy" Windsor (there's a name we haven't heard in a while!) is apparently working for SPEED again in some capacity.  He just tweeted that the live feed isn't working quite yet.  Yay us. 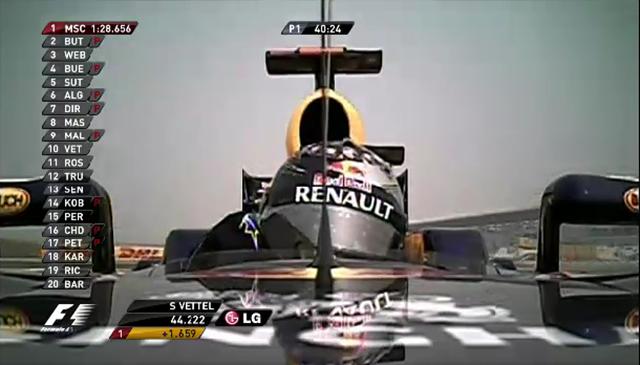 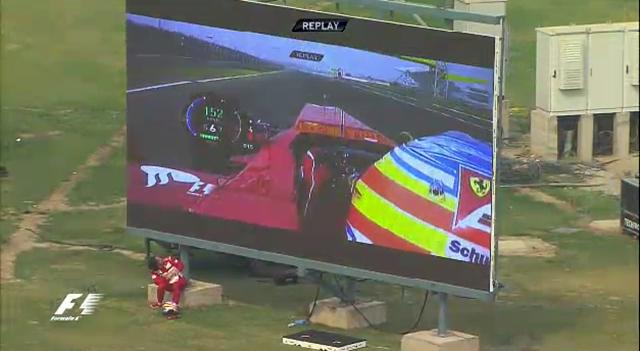 29:15 - Track is very dusty and slippery.  Lots of people going off all over the place.

26:54 - My heavens, that big Turn 10 just goes on and on and on, doesn't it?  That's gonna kill more front-left tires than anything, right there.

24:50 - Facilities look complete.  Place seems a lot more done than Korea did last year... or even this year, come to think of it.

23:18 - Just to give you an idea of the amount of smog/dust/fog/whatever in the air, take a look at this: 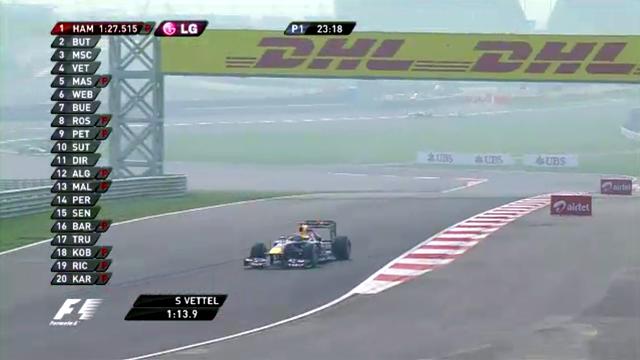 One winces at the thought of that getting pulled into an 18000rpm engine... and it was worse earlier.

17:00 - I like the circuit, but it doesn't seem to have much of an identity yet.  Maybe because I'm grumpy about the live stream not starting until half the session was already done?  Perhaps.  Or maybe it's because this is the first time we've ever seen cars on it.  Still, other than that big big turn, the place seems flavorless.

10:40 - I'll say this: lots of elevation change.  I'm surprised we haven't seen a driver ralphing into his cockpit yet.  Up and down, up and down, here's a turn, up and down, rinse, repeat. 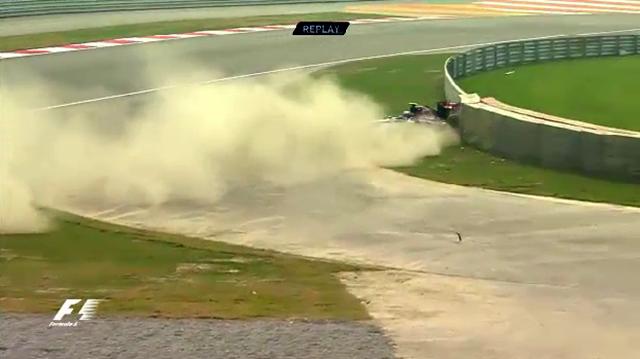 0:00 - Session over.  Lewis Hamilton has the fastest time (1:26.836), followed by Vettel, Webber and Button.  I'm withholding judgment on the circuit until I actually see people race on it, and maybe after the F1 TV Director stops popping the greenies.  Good lord, he was changing camera angles every other second, like he was paid by the cut or something.  I'm inclined to like the track, though.  Seems promising, but so did Valencia and we know how that one has panned out.  Very wide racecourse, I noticed.  Some places, you could probably go four abreast and still have plenty of room.

Full coverage of P2 will be later Friday!  Thanks for sticking around for this abbreviated liveblog!

1 Stray dogs on the track... they wouldn't have that problem in Korea!