F1 Practice: Hungary! As is usual with practice, it was dull, boring, and really uninteresting.  In fact, it was so bad that I didn't watch all of it.  Hamilton was the fastest in P2, which means nothing, just like Ferrari being fastest in P1 means nothing.

Ferrari brought out their version of the long dorsal fin, which would be interesting if anybody really knew what it did.  In F1, if someone does it, sooner or later everybody does it, and this year, it's the long fin.

Now, if you ask the teams, they'd probably say something like "it smooths the airflow over the rear wing."  Uh-huh.  Sure.  I'd believe that on the RedBull cars, since the fin almost goes all the way back to the wing, but Ferrari's?  It's got a huge cutout in it, much larger than the others.

In other bodywork news, in P2 McLaren took a cue from Honda, and debuted... 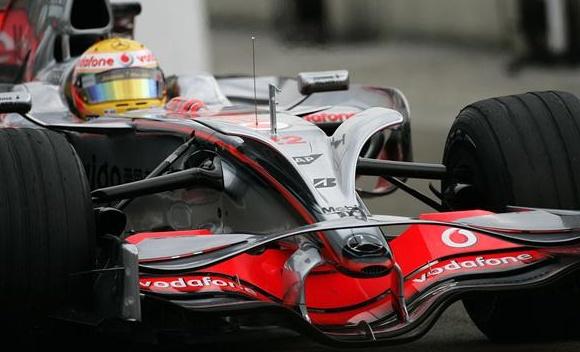 ...handlebars on the nose.

That's just embarrassing.  It's obviously done SO well for Honda, but I guess the team decided they need more downforce for Hungary.  To be fair, everybody needs more downforce here, but c'mon.   If there's any justice, they'll not run it during quals or the race.

See you Saturday for Quals!

1 I can think of a couple other reasons. At high speeds it may function like a vertical stabilizer, granting a little extra lateral stability. (I don't much see the need on a dry track, given the ridiculous amounts of traction these cars normally have, but on a wet track, it may mean the difference between regaining control or putting it in the wall.) It would also give a stabilizing push on the ass-end of the car if you ever start to lose it in a corner.

I wonder where the CG is on an F1 car. You're usually shooting for even load on all 4, but that can be tweaked with wing downforce.

2 Well, that's possible, Will, except drivers have complained that the extra sail area created by the fin actually unsettles the car in breezy conditions!

The center of gravity in a F1 car is right about where the driver sits,which is counterintuitive when you consider how... well, flimsy isn't the word I'm looking for, but it's close... how flimsy the cars are.  You'd think that with the big loud lump of metal at the rear, they'd be somewhat tail-heavy, but the engineer-designers do a lot with ballasting.  Cars have to be 1334lbs in weight minimum, including driver, but they really don't even weight that much.  Enter the ballast, which the teams can move around the car for stability on each individual track.

So saying the CoG is under the driver's butt is really just a generality; it moves depending on the race.  At Monaco, for example, it's a bit farther forward, at Indy it was a bit farther back.