F1 Practice: France 2008! Over time, I've come to the realization that practices for F1 teams are actually... dull.  The main reasons I watch them is to refamiliarize myself with the circuit (after all, for the most part we only see these tracks once a year), and to make sure that if something horrible or fantastic happens, I know about it (fortunately the bad stuff doesn't occur that often).

Then there's that whole "I love Formula 1 racing" thing too, I suppose.

The main thing I gleaned from today's P2 session was that the race on Sunday has a chance of being interesting.  The removal of traction control from the cars has made this very flat, very smooth track very, very ungrippy.  There were a lot of visits to the kittylitter and runoff areas today as the drivers struggled with the asphalt-like-glass.

I also learned that there's a 60% chance of thunderstorms at Mangy-Curs on Sunday.  That would go a long way towards making the race interesting, all on it's own.

Finally, I discovered that the curbing at Mangy-Curs might have replaced Montreal as "the deadliest curbs in F1."  They're nowhere near as high as they were at the Circuit Gilles Villenueve, but there's an interesting thing going on here.  Since the track in France is so flat and smooth, the teams are running their cars very, very low to the ground.  After all, there's no bumps to worry about, so get the bottom of the car as close as possible to the asphalt and improve the aerodynamics under the car.

But to get a fast lap around Mangy-Curs, you MUST use the curbs.  Do it right, and it's a beautiful display of what the blend of man and machine can do in the quest for speed.  Do it wrong, and... well, you're Adrian Sutil: 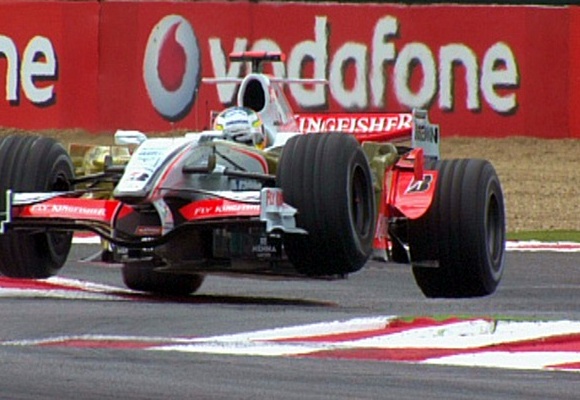 Good afternoon ladies and gentlemen, and thank you for flying Kingfisher Air.
I'm Adrian Sutil, and I'll be your pilot today.
And just like Montreal in 2007, somehow he didn't break the darn thing on landing.  They build 'em tough down there in the Force India garages!

Not so much in the McLaren pits, though, where both Heikki and Lewis broke bits off their chargers (Hamilton a strake off his diffuser, Heikki the dip on his front wing) by going over curbs and into the kittylitter.

So until Saturday's Quals, just remember: when all your wheels are on the ground, this is GOOD.  Wheels in air?  BAD.  Can't steer well then.

1 What you call "the kittylitter", it's gravel, right? Something like pumice, maybe? The point of it being to resist a rolling car going through it, so as to slow it down before it hits something tall and unyielding?

2 Right.  The composition of "kittylitter" varies from track to track, depending on what they have to work with.  In Bahrain, for example, it's mostly sand.  In France, it's gravel.  In Germany, it's ground-up French rifles (*rimshot*).

For a long time, gravel-traps were the best way to slow down a car before it hit something "tall and unyielding", usually a tire barrier or armco.  "Best" being a relative term, of course... it grabs tires a lot better than grass, but it leaves a lot to be desired.  Somewhere in my collection, I've got a clip of a car sliding off the track, hitting the sandtrap moving laterally, and cartwheeling side-over-side before ending up upside down... with the roll hoop/air box above the cockpit buried fairly deep into the sand.  How the driver escaped that one is beyond me.

For the most part, kittylitter is fading away.  F1 brakes being what they are, it's just not as safe as a big asphalt runoff area.  Some tracks with a lot of space have both on some of their high-speed turns: Turkey's turn 8, for example, has a huge expanse of asphalt with a substantial gravel-trap (dyed blue for some unknown reason) beyond it.  Nobody has reached the gravel yet, though Mark Webber gave it a good shot in 2007... backwards.

And sometimes, kittylitter just doesn't do the job at all.  Consider Heikki Kovaleinninninnie's crash in Spain this year, when his left-front wheel broke.  He speared right through the gravel like it wasn't even there, then buried his car up to the cockpit in the tire barrier.  If there'd been asphalt there, he would have still hit the wall, sure, but his brakes would have had more of a chance to slow him down.

The loss of graveltraps, though, would deprive us of moments like Felipe Massa getting caught in one that's just a foot or two longer than his Ferrari.