F1 Practice: Canada 2015 Well, that was a bit of a wet noodle.  Practice 2 started out well enough.  Every team had their car out on track almost from the get-go.  That's exciting for the fans, but not so much for those "in the know", because that always means that weather is coming in, and the teams are trying to get as much data in the computers as possible.  Sure enough, the on-screen graphics quickly popped up a message: rain due at 135pm Pond Time.  Lewis Hamilton's Mercedes was tearing off laps a good .330 faster than anybody else (on top of his session-leading times in P1), but he didn't look jaw-droppingly dominant.  Indeed, he very nearly stuffed it into the Wall of Champions at one point, missing the turn-in to the final chicane and getting all four tires off the ground when he hit the backside of the curb.  For the record: your grip levels are greatly reduced when you're not physically in contact with the racing surface.  He managed to not come to grief, though.  And then, at 137pm Pond Time, the rains came to Ile Notre-Dame.  Everybody made their way into the garages and superhero Berndt Maylander began to run laps around the course, testing grip levels. 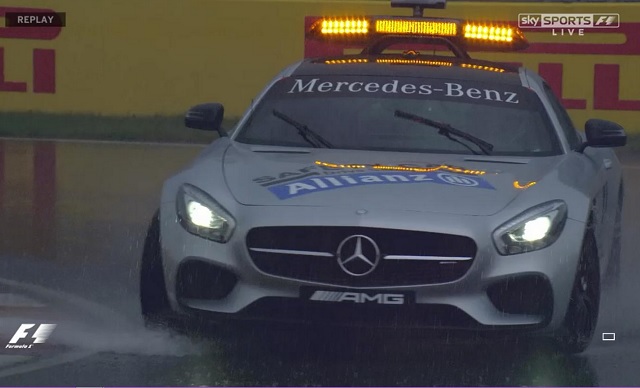 After Berndt gave the car a rest, Mercedes had a great idea.  Their thinking went something like this: "Just in case it rains on Sunday, which it isn't supposed to do but the possibility exists that it could, let's send Nico and Lewis out on Intermediate tires to try and get some data.  It'll be fun!"  Meanwhile, everybody else kept their cars under cover, snug and dry.  So how did Mercedes' fun-filled adventure go? 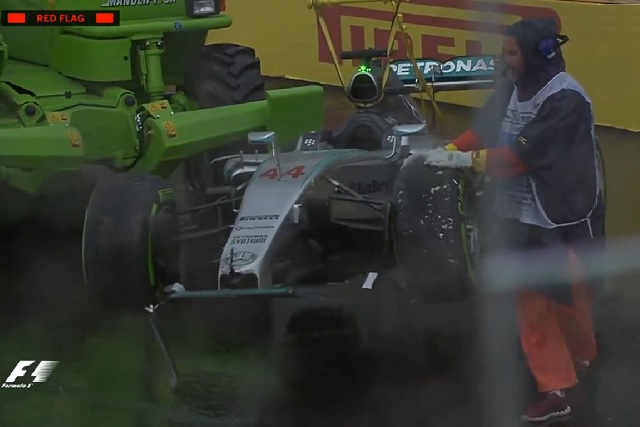 Ah.  Yes.  Heading into the Hairpin at less-than-racing speed, Lewis realized that he wasn't so much driving a car as riding in a boat.  The car was aquaplaning so badly that you could actually see that the front tires weren't making contact with the track surface.  Remember what I said about grip levels being reduced in that situation?  The car slid all the way into the barriers on the outside of the Hairpin, which is quite the journey.  I can't remember the last time I saw someone end up there... not even Robert Kubica made it that far.  Anyway, the good news was that the impact was at quite low speed and Lewis was unhurt.  The bad news was that the nose got stuck in the tire barrier.  The ugly news is that, when the tractor pulled the Merc free, the car swung back and smacked into the big green chunk of machinery.  Who knows what sort of damage that did to the rear of the car?  Of course, the session was red-flagged during all of this, and once it was over with, none of the other teams thought it was worth going back out.  Or they were all laughing themselves sick, one of the two.

Quals in the afternoon tomorrow; I'll be having lunch with the folks, so I won't have the post until after I get back.  See ya then!

1 Sooo...who's been making strategic decisions for Mercedes, and what are they drinking?

4 For the record: your grip levels are greatly reduced when you're not physically in contact with the racing surface.

5 Ah, hydroplaning... I remember my Taxi driving days and deliberately sliding around 30th St. Station in Philly in a Crown Vic whenever it rained.