F1 Practice: Canada 2010 It's no secret that Friday practice sessions aren't really very exciting.  I watch them mostly to get myself refamiliarized with the layout of the circuit and how the cameras are placed, so I'll know where we are at any time during the broadcast ("Ah, there's that Allianz sign with the small tear, this is Turn 5").  But, by the Holy Shifter of St Fangio the Quick, was this a bloody dull practice!  Seb Vettel had the fastest lap, followed by HWMNBN and Nico Rosberg, but McLaren's duo of Hamilton and Button could only manage 9th and 11th, respectively.

The biggest news out of the session was the track itself.  Over the past two years, the organizers resurfaced the Circuit Gilles Villeneuve, with the result that it's incredibly slippery.  Lewis Hamilton went so far as to say that it was like being on an ice rink.  Of course, part of that is because the track is only used for a few race weekends a year.  The other part is that it's been raining all week in Montreal, and whatever rubber that's been laid down on the surface has been washed away.  The drivers are discovering that you have to allow three laps minimum to get the tires up to racing temperature when at some places, like Monza or Turkey, they're ready before your first lap is done.  The Legendary Announce Team's new voice from the pits, Will Buxton, said that he saw a Toro Rosso come in after five or six laps and the tires still looked brand new.

Low heat equals low grip.  Low downforce settings on the car (Canada is second only to Monza in the low downforce category) also equals low grip.  Combined with a slippery surface, we saw a lot of cars wobbling all over the place.  And don't think it's going to get any better as the weekend goes on.  We're looking at rain both Saturday and Sunday.  Sweepers, man your brooms, there's gonna be a lot of carbon fiber scattered around the Ile Notre Dame after the race.

Finally, I wanted to show y'all what I was talking about when I mentioned that the cars came awfully close to the Wall of Champions.  How close? 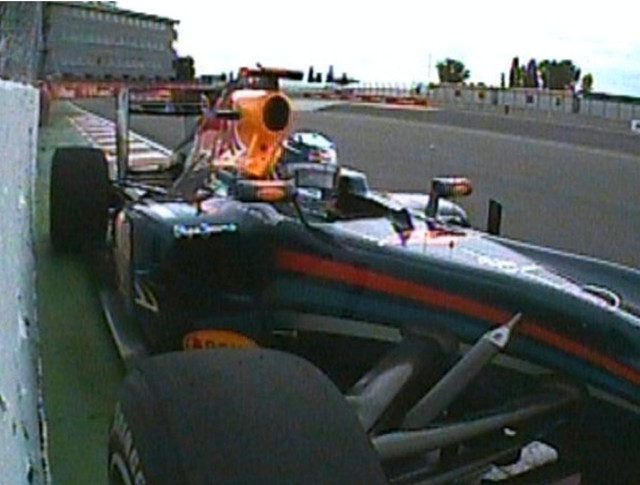 For Montreal, that's a lot of run-off space, by the way.  Most of the circuit is lined with walls, much like Monaco.  There's about a foot of space between the edge of the track to the walls; if someone hits them, you get a ping-ponging effect that almost always guarantees a Safety Car.  In fact, this is the place the Safety Car was invented.

Quals tomorrow afternoon via tape delay, thanks to ARCA and Craftsman Truck Series races.  See you then!

1 Why do they reduce the down force for this track? (I'm assuming it's a deliberate decision, involving how the tail fin is set, and maybe how big it is.)

2 On some tracks, a car needs to be nimble, able to change directions on a dime; Monaco or Singapore might be good examples of this.  To get that, though, you sacrifice top speed.  On most circuits, you need to balance raw grunting velocity and nimbleness, because there are both high speed stretches and complex technical sections; any of the Tilke tracks would fall into this category.

Then you have the places, like Monza, where speed is king.  There are no fiddly-bits to deal with, and if a car is only going 190mph it'll be five laps down before the half-way point.  Canada is one of those sorts of places.  Other than the first turn and the big hairpin, the cars don't slow down much.

Downforce is the key to all of those choices.  More downforce gives you more grip on the track, but at the cost of speed.  The opposite is also true: less downforce, more speed but less grip.

Downforce is also drag, you see.  You have a rear wing that looks like a barndoor when you're standing in front of the car?  You'll be able to hold onto the track, but that obstruction will also slow the car down.  Conversely, if your rear wing is as thin as a sheet of paper lying on a table, you're gonna be blisteringly fast because the drag'll be minimal... which, on most circuits, means you'll get to the accident site faster.

The dominant feature at Circuit Gilles Villeneuve are the two "straights" running to and from the hairpin.  Without a slow technical section, you can do away with drag-creating downforce... in fact, you have to if you want to compete.

There's a saying in motorsports: you've got to go slow to go fast.  That aphorism basically means that if you can't make it through the twisty bits quickly and cleanly, you can't have a good lap time.  In 2008, when Force India was still bad, it was routine for them to be the fastest car through the speed trap, meaning that for straight-line velocity, nobody could touch them.  The problems occurred when they had to turn.

Well, at a place like Canada or Monza, you can throw that witty saying in the dustbin.

3 OK, that makes sense. A big tail with a lot of cross section is going to cause a lot of turbulence, and that's parasitic.

4 It's simpler than that.  You get downforce by re-directing the airflow, creating low pressure areas under the chassis, etc.  But there is no such thing as a free lunch, if you're using airflow to push the car down, that energy is coming from somewhere.  I don't know if you have heard the famous statistic that an F1 can generate enough downforce to drive upside down on the ceiling of a tunnel, but you can imagine the amount of air being diverted to generate that much force.

A few years ago Honda took their car from the previous season out to the Bonneville salt flats in an attempt to set some landspeed records.  They didn't try and tweak the engine for more speed, but just by removing most of the downforce and turbulence generators from the car, they got the top speed over 311mph.

5 David, I'm afraid your numbers are incorrect.  BAR-Honda's Bonneville 400 team took a race-legal 007 chassis to (unofficially) just over 413kph (256.7mph) at a dried-out lakebed near the Bonneville Salt Flats (which had flooding that year).  The next they officially hit 400.450kph, or 248.828mph, at Bonneville itself.

There were still wings on the nose (though greatly reduced), and what looked like a miniature airplane's vertical tail replacing the usual rear wing, but it was race legal.  Here's a viddy about it!