F1 Practice: Britain 2009 (and other stuff) Due to some... extreme weather here, Pond Central's recording suite only managed to tape the first 10 and the last 15 minutes of today's second Practice session from Silverstone.  Oh well.  For what it's worth, however, the best action came after the session had officially ended.

Force India's Adrian Sutil ended up an incredible third on the session's timesheets.  Greatly enthused by having a competitive car, even if for one day, he came into the pitlane... where he promptly ran over the nose of his teammate's car, which was being pushed back into the garage. 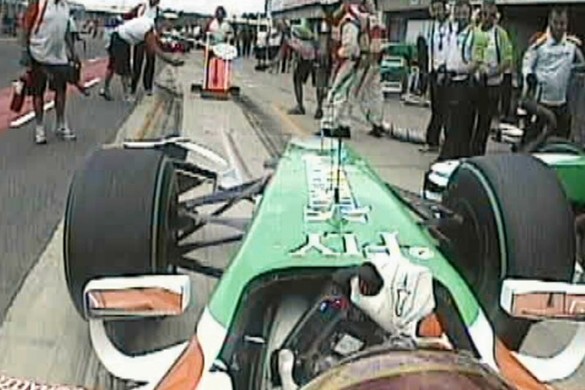 Oops.
So, with a dearth of action on the track, let's concentrate on the action occurring off the track.  On Thursday, the Formula One Teams Association (FOTA), feeling that their negotiations with the FIA over the budget cap have stalled and have no chance to recover, announced their intention to break away from F1 and start their own series.

The FIA, in turn, has decided to bring legal proceedings against FOTA.  Their statement reads, in part: "The actions of FOTA as a whole, and Ferrari in particular, amount to serious violations of law including wilful interference with contractual relations, direct breaches of Ferrari's legal obligations and a grave violation of competition law."

Interesting how the team with the red cars, FIA's long-time favorite, have suddenly become the red-headed stepchild.

With all this rhetoric on the table, the Legendary Announce Team described the fracas like a divorce.  The couple have seperated and filed papers against each other... now the real negotiations can begin.  Throw in a meeting of the World Motor Sports Council next week, and there's a halfway decent chance that this will all be finished then.

The solution is easy and obvious: Max Mosely must go.  Unfortunately, Mosely knows this and has already gone on record as saying that he will not, under any circumstances, step down.  If that, indeed, is the case and he stays on as president of the FIA, then there is no chance of reconciliation whatsoever.  At this point, Mosely can't back down on the budget cap without losing whatever credibility he has with the rest of the FIA, at which point he may as well actually have stepped down.

So what will happen when FOTA breaks away from F1 and starts their own series?  Unfortunately, there is precedent, and it isn't pretty.  In 1996, Tony George, president of the Indianapolis Motor Speedway, broke away from CART, and formed his own series, the Indy Racing League (IRL).  While CART had the stronger hand for a while, they eventually went bankrupt and merged into the IRL... in 2008.  With the split of the two series, the fanbase was fractured, with the only race for both series that drew any attention being the Indianapolis 500.  Eventually, casual fans stopped caring, and even the Indy 500's ratings plummeted.  American open-wheel racing, which pre-split was incredibly popular, became an irrelevancy in the world racing scene.

In this particular split, the two sides each have their own advantages.  FOTA has the big names (Ferrari and McLaren), plus the best drivers in the world.  The FIA, however, has a big hammer.  They have the ability to ban any driver or team that participates in the FOTA series from ever racing in a FIA-sanctioned event again.  They can also ban any circuit that hosts a FOTA race from ever hosting a FIA event again.  They can also lay sanctions on any driver that competes against a FOTA driver (even in a charity event, or the Race of Champions), including banning them from FIA events.  Considering the way Bernie Ecclestone and the FIA have treated Silverstone, I suspect that they'll be willing to host one of the FOTA races.

About the only place that the FIA doesn't have much of a foothold is in the United States.  The only major series under their banner here is the NHRA.

I suspect, however, that the FOTA teams will have the fans, and they have the money.  That'll be the deciding factor in the success or failure of any spinoff series... and I bet that, in the end, if it does come to a schism between the series, FOTA will succeed.  After all, Ferrari, McLaren, Button, Alonso HWMNBN, Massa, Raikkonen, Hamilton and so forth are a heckuva lot easier to cheer for than Max Mosely.

Let's hope it doesn't come to that.

1 What about A-1? How's that sanctioned?

BTW, I watched an Indy race in Texas. Justin Wilson was stuck in the rear. But the rest was weirdest stuff. First, you never brake, ever, in Indy. In fact even lifting off a little bit will cost you places. I think this ingrained thinking got Milka out of the race when she tried to avoid a wreck by steering when it was obvious that braking was the only option.

3 AAAGH! AAAGH! You said his name! We're all gonna die!

Excellent analysis of the split situation.

Mosley is lucky he still has a power position after that scandal last year.  Perhaps he ought to get down off  his high horse.

6 Bernie has been moving around all the motorhomes in an Machiavellian manner, according to the coverage on the BBC today. Wheeling and dealing, lots of talking. I've got a feeling he will move things forwards quickly.

I don't think it's sensible or right, but I think that Max will give in on the budgets, maybe with a bit of a further delay, or a higher budget, or more testing as a sweetener. He's clawed his way through the last year or two, I think he'll try and survive, and I think Bernie will win him over to that view.