Welcome to Interlagos, which means "between the lakes" in Brazillianese, and "Wonderduck hates this track" in English.  Particularly the final turn-goes-into-the-front-straight thing that has the drivers cutting across the pit-in lane at 190mph and always makes me think of a catastrophe about to happen every time I see it.

(Update: Steven, here's a picture of the final turn from an onboard camera: 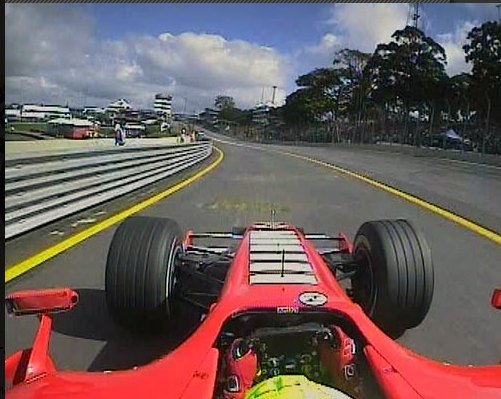 That yellow line on the right is part of the pit-in lane.  Drivers are supposed to stay outside of it if they're not coming into the pits.  At Interlagos, however, this rule is ignored completely, and every driver uses it as part of the 'driving line' through the turn.  To a certain extent, yes, I'm somewhat concerned about a pitting car being rear-ended, but I'm also worried about a car hitting the pit wall.  There's also an optical illusion from the TV camera at turn 1 that makes it look as if the cars are entering the pits at 180mph that disturbs me...)

To be fair, I will give the course credit: they resurfaced the track, so it's no longer like driving on rumblestrips.  Now it's almost smooth... for this race, at least.  Next year?  The track'll be crepe again.

There's not much they can do about that, short of moving the circuit.  The location of the darn thing, between two lakes set in a valley, means that it was built on very soft soil... so the concrete and asphalt actually sinks over time.  Of course, it all doesn't sink at the same rate, so the track wrinkles.

And places like Watkins Glen sit unused.  How is this fair?

Nothing surprising from practice today.  Hamilton was fastest.  The tire choices this week are the supersofts and the softs, and it looks like the supersofts will last about, oh, one lap or so before they start to grain and shed bits of themselves.  Lovely.

In other news, Alex "Man-Mountain" Wurz has officially retired, and has been replaced by Kaz Nakajima... and the Williams seems to have woken up big-time under his tender efforts.  Late in the session, Kaz was fourth.  He fell to 8th, finally, but still impressive for the team.

Also, Phil Massa has been signed by the Peripatetic Pony team through 2010.  This would seem to indicate that HWMNBN will NOT be going to the Red Team, since Kimi is also under contract.  Renault is his probable destination.

No chance of him coming back to McLaren.  There was a board meeting at Mercedes (who owns 40% of McLaren) recently, and they voted to launch his arse as soon as the season is over.

Amazingly, Ralf Schumacher IS driving this week.  This surprises me, to be honest... he's not going to be back with Toyota next year, after all, and he's honestly stunk up the joint this season.  Why NOT try someone else for a race?

Maybe he's still waiting for the shift manager job at the Berlin McDonalds to open up?

1 Your concern is that people slowing down to go into the pit could get rear-ended?