F1 Practice: Abu Dhabi 2009! Evening at Yas Marina... actually sounds kind of nice, has a ring to it.  Kinda like 'chupathingy.'  As with most practice sessions, this one was rather dull and boring.  To be honest, the only reason I watched the whole thing was to get used to the new circuit.

Interesting to watch the way the falling of night affected the lighting across the track.  Unlike Singapore, which uses light trusses that follow the layout of the circuit, Abu Dhabi is using the more familiar (and permanent) light standards, much like you'd see in a baseball stadium... just a lot more of them. 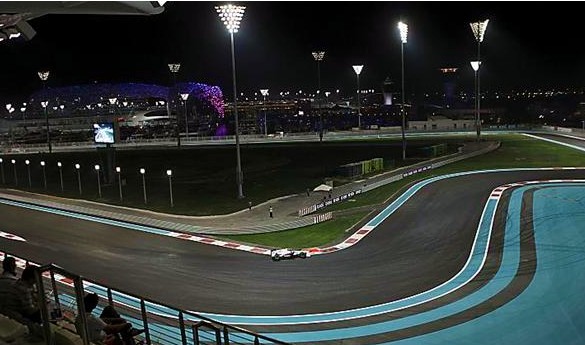 I think I actually prefer Singapore's truss system over Abu Dhabi's towers, but only because it looks cooler, like a ribbon of light taking the shape of a racetrack..  Functionally, there doesn't appear to be any difference, though; the track was brightly lighted and visibility appeared to be excellent.

I find it somewhat amusing that the system in Abu Dhabi was designed and built by Musco Lighting of Oskaloosa, Iowa.  Or at least I did until I took a look at their website and saw that Musco may very well be the company for motorsports lighting setups in the world.  Learn something new every day.

On track, the only real news was that McLaren was 1-2 on the timesheet, Ferrari was lousy, and Robert Kubica's engine done blowed up reeeeal good.  That'll pose an interesting quandry for him, as it was the last of the eight engines he was allowed for the season.  He can either install a pre-raced one and suffer no grid penalty (since it occurred on Friday), but then have to worry about reliability issues, or put in a new one and take a 10-spot penalty.

Please note that Seb Vettel has been dealing with this problem for the past three races; he's been using his Monza and Spa engines.  Lord knows which he's using for here.

The last thing I'll mention here is how amazing the Yas Marina Motorsports complex is.  Air-conditioned pit stalls, a first for F1.  Two full sets of pits on opposite sides of the track, so the GP2 boys finally get a first-class pit lane (instead of using temporary trailers and tents, essentially).  Hell, two full race control towers, which are fairly impressive structures: 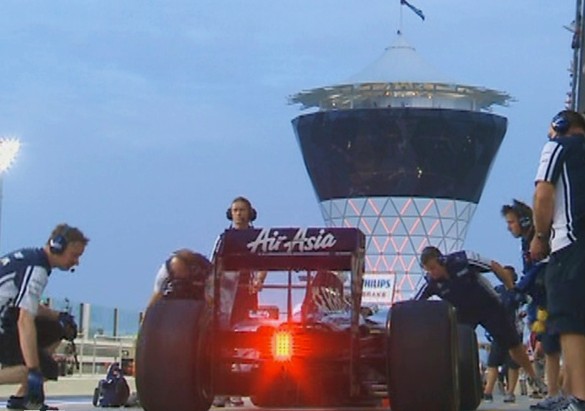 And, in another first for F1, all the grandstands are covered, which makes sense considering that Abu Dhabi is kinda warm... the yearly average high temperature is 88 degrees, and humid.  Of course, the race is sold out.

Which isn't all that impressive, when you realize that this multi-billion dollar facility seats fewer than 50000 people... 41093, to be exact.  Wrigley Field in Chicago, one of the smallest ballparks in Major League Baseball, seats 41118 for baseball, and sells out 81 times a season.

1 That first picture really makes clear how wide this track is. It seems like it's a hell of a lot wider than tracks usually are. (It looks like it's as wide as an 8 lane highway.)

I was thinking the track looked a bit Jetson-esque--until the sun set.  That track is beautiful, especially the lighting over the hotel.  It looked like it was covered with sparkling sapphires.  (And considering the opulence visible around the track, it may well have been - lol.)

The over-under-around-and-through portions of the track were certainly interesting.