F1 Pr0n: Williams FW34 Sir Frank's team is one of a regal history having fallen on hard times of late.  The team has been around for 35 years, and is one of F1's historical "Big Four" teams (with Ferrari, McLaren and Renault).  In the time I've been an active fan of the sport, however, they team has, at best, just been okay... and at worst, they've been bad.  So will a return to Renault engines, paired with the new FW34 chassis bring a return to prominence? 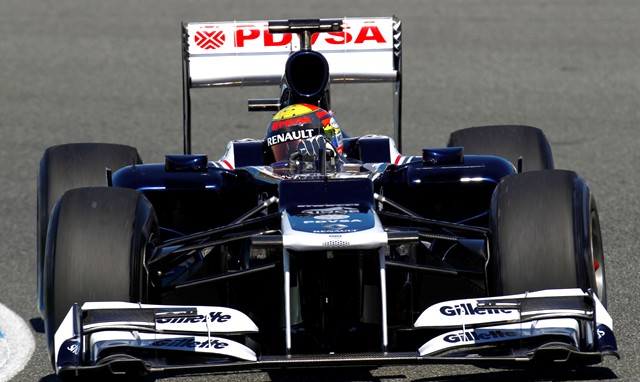 No less an individual than Sir Frank Williams hisownbadself has said that the new car has less than 5% parts in common with last year's FW33.  In some ways, this is good: that car was a dog.  It's also quite the risk, as F1 teams have historically found that evolution, not revolution, is the way to success.  Again, though, the 2011 car was just bad and there probably wasn't all that much worth keeping.  Having said all that... the Williams' paint job is terrible for seeing details.  The platypus step looks like it's a vertical wall.  It's not, but that's the way it looks.  Big air intakes, maybe the largest we've seen so far.  I'm amused by the Gillette sponsorship on the multi-level front wings... ladies and gentlemen, the twin-bladed razor of F1 cars!

Wacky rear wing!  The sidepods are small-ish, but nicely shaped.  No undercut on them at all though.  I HATE the the "flying" fin on the airbox.  I'm sure it's aerodynamic, but I just don't like it.  I'm kinda struggling for stuff to talk about with this car.  Of course, I've talked about what, six or seven others already?

I've lowered the contrast by 50%, I've boosted the brightness by 30%, and increased the saturation, and the car still looks like it's sucking in all light within 20 feet.  Ugly nose.  Having said all that, I really hope there's some speed in this chassis.  Formula 1 would be much better off with Williams being good.

I'll admit it: I got nuthin' here.  The team sounds like they're excited about the FW34, but they would do, wouldn't they?  On the other hand, I can't get excited about it.  If everything goes right, does anybody realistically see them finishing any better than 5th in the constructors?

1 Rainy races are going to be a problem.  OTOH, your description reminds me of Disaster Area's stunt ship.  Being almost completely friction-less would certainly help performance.

2 You would think so, but would it not actually hinder performance?  After all, with no friction you have no grip, and therefore no handling or acceleration.

My god... HRT has a frictionless car!