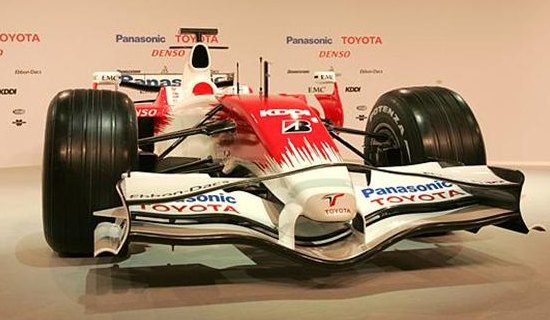 Another day, another rollout!  Today, it's Toyota, with their 2008 car, the TF108... and to be honest, I'm somewhat underwhelmed.  There's some change from the TF107, such as the McLaren flying nose, but truthfully, it's a minor evolution over last year's car. 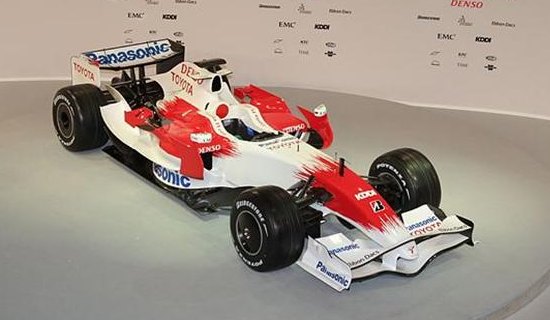 ...because it is.  It's a nice paint scheme, honestly... a lot better than the pink-on-white of 2006, that's for sure, but again, the livery is about the same as last year's.

The air-scoop is longer, again, just like the McLaren and the Ferrari.  Meh.  I'm underwhelmed, and there aren't much in the way of changes again.  Maybe the little ramp above the "Panasonic" logo on the sidepod?  I don't remember it on the TF107. 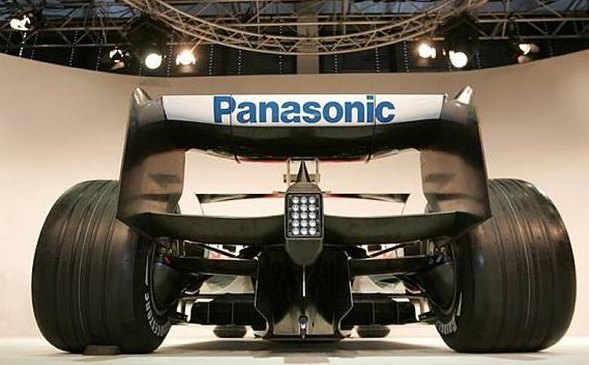 Enjoy this view while you can... it's probably the last time anybody'll see the back of a Toyota F1 car all season.

1 Tell us about those 15 lights. Presumably they indicate things like acceleration, gear, braking, so as to permit you to follow someone closely without rearending him.

2 Steven, I'm afraid it's nothing so exciting.  Those lights are turned on and flashing when the car has the pit-lane speed limiter engaged, or during wet conditions (I presume they'll be on during the first ever night race, coming this season, too), so as to make the car that much more noticeable... if you look at this photo, you'll notice the car going backwards has a bright red light under it's tail.  That's the "hazard flasher".

3 It doesn't seem to have helped him any.

That was at the 2007 European Grand Prix, during the ridiculous downpour at the beginning of the race.  Adrian Sutil just lost control in the rain, with nobody bumping him or anything... he could have had a rotating spotlight on a trailer behind him and he still would have ended up in the kittylitter that day.