F1 Pr0n: McLaren MP4-27 McLaren has always seemed to have been of two minds when it comes to their F1 cars.  Either they're a little boring or they're completely goofball.  Last year's MP4-26 went full goofball, what with the L-shaped air intakes on the sidepods and all.  For 2012, it looks like the team from Woking has gone button-down collar and pocket protector on us.  Ladies and gentlemen, the MP4-27. 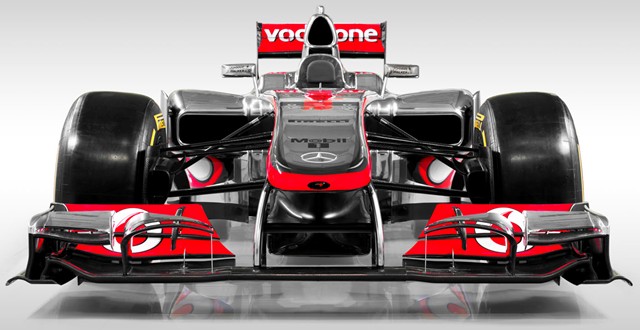 The first thing that leaps out at you is... the more or less normal looking nose.  As we'll see in the next picture, all is not as it appears, though in comparison to the Lotus Caterham, it's boring.  The air intakes on the sidepods are back to something a little more staid than last year, though they are somewhat... elongated.  The section directly under the nose is a little busier than last year.

As with the Caterham before it, the MP4-27 has teeny sculpted sidepods, clearly to steer more air towards the back.  As mentioned earlier, the nose doesn't have the stonking great stepdown like the CT01, but it does rather plummet.  It's a graceful plummet, but compare it to the MP4-26, and you'll see the difference:

The rear wing of the new car also has... fingers at the bottom of the rear wing assembly.  These started to appear on the cars last season, and I'm sure there's something good aerodynamically involved with them, but I'll be switched if I can figure out what it is.  I'm not the big brain though, as anybody who's read The Pond could attest to.

No matter how fast the MP4-27 goes, there is one thing you can say about it: it sure is purty.  I think they need to go back to the silver rims though.  The black just doesn't work.

Now for the best thing of them all: the annual McLaren centerfold!  Just click "more" for some sweet sweet Glare On Wheels action, sans staples! 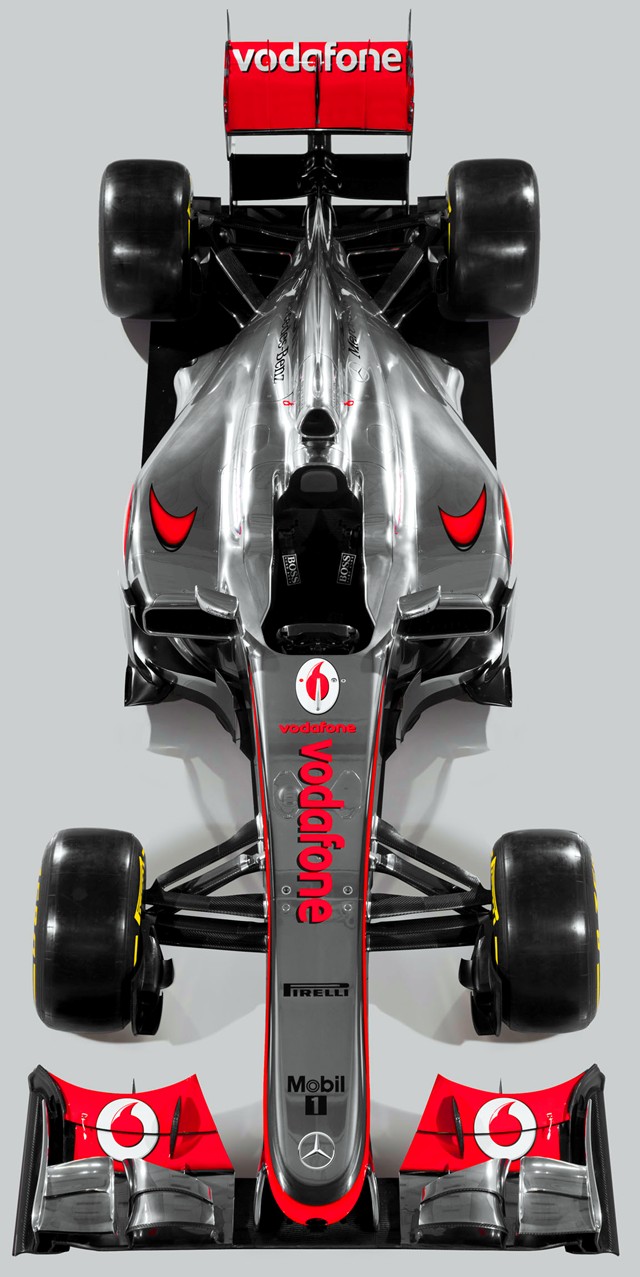 2 Also, is it a camera angle thing, or does it look like the bottom runs higher than last year? Looks like there's more clearance beneath the car.

3 I think you're right, Steven... I didn't even notice that.

4 Yeah, the secondary intakes on the airbox are gone.  I think the clearance thing is a camera angle effect; compare the plane of the tops of the front tires and you can tell that the shots are from different heights.  Not only are the sidepods very sculpted, it looks like the airbox also tapers more quickly down at the rear.

Now I see that Adrian Sutil has declared that  his friendship with Lewis Hamilton is over, after Hamilton failed to testify at Sutil's trial.  It's almost too bad Sutil is without a ride this year; he could've given Hamilton someone other than Felipe Massa to crash into...

5 Much nicer than the platyrham.  Hopefully more of the field can make a good looking car within the current regulations.

It does look like the front wing is farther from the ground on this car than last year, but when you account for the viewing angle the front of the under-tray appears to be at pretty close to the same height.  And isn't the front wing height something that's adjustable?  Certainly the teams change their nose around lot, so it could just be that they've got a nose designed for a different track on.