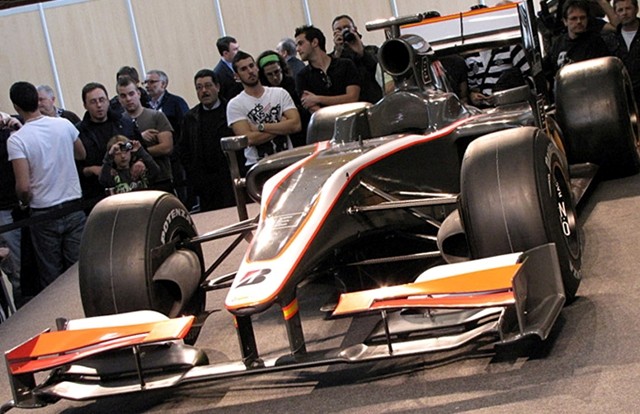 Okay, the first thing I can say is that this car is going to be able to outbrake anything on the planet.  Look at the size of those brake ducts!  Merciful Monza, those things are huge!  They'd be able to ingest a watermelon!

Then there's that front wing.  Yesterday I called it "simple", and now I'm going to go a little bit farther and call it "really simple."  I can make a more complex curve with a sheet of 3/4" plywood... and a plain sheet of plywood would probably create more downforce.

Let's look more, shall we?

How do I know it's a start-up team?  They've got the wrong tire on the front-right corner.  Notice the arrow is pointing opposite the direction of travel (see the rear tire for the way it should be pointing).  Yes, I know it's probably so the "Bridgestone" is on top and reading the right way, but it's still a little... surprising.  As long as they get it sorted out in time for the race...

The color is still really ugly. 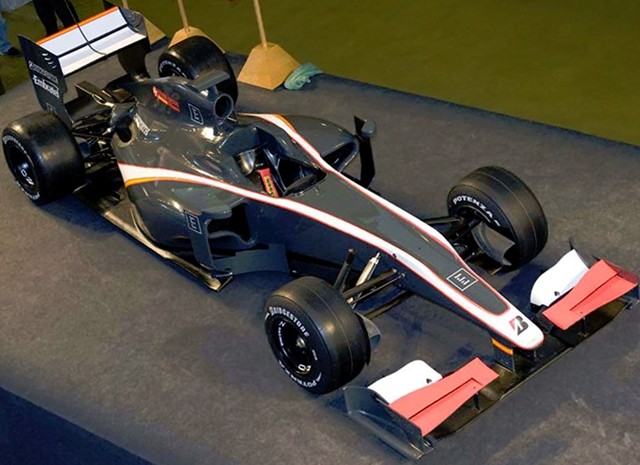 Unlike every other car on the grid, the HRT HRT has a suspension made out of metal, instead of carbon fiber.  According to driver Bruno Senna, this makes the car about 20kg heavier than everybody else.  Sure, they can remove that much ballast but it's still not a good sign.

1 Those ducts are cooling air for the brakes?

2 Yah.  Teams change them depending on the brake requirements for each track.  Some places, like Monza, don't use the brakes much and don't need to have as much cooling, so the ducts are very small.  At a track like Canada, however, the brakes are abused and get large ducts.

But these are the clown shoes of the brake duct world.  Perhaps if they were racing on the surface of Mercury, they would be appropriate.

At a track like Canada, however, the brakes are abused and get large ducts.