F1 Pr0n: Haas VF-16 If you're a fan of Formula 1 coverage here at The Pond, you have this car to thank for 2016.  To be blunt, I was leaning towards giving up on writing about F1 unless something important occurred... but then Haas F1 Team joined the grid.  Why does that matter?  Because they're an American team, based in Kannapolis, NC, with a "forward base" in Banbury, England for the European leg of the season.  Yes, I'm rooting for the team on strictly nationalistic grounds, and that's what is keeping me interested in F1 this year. 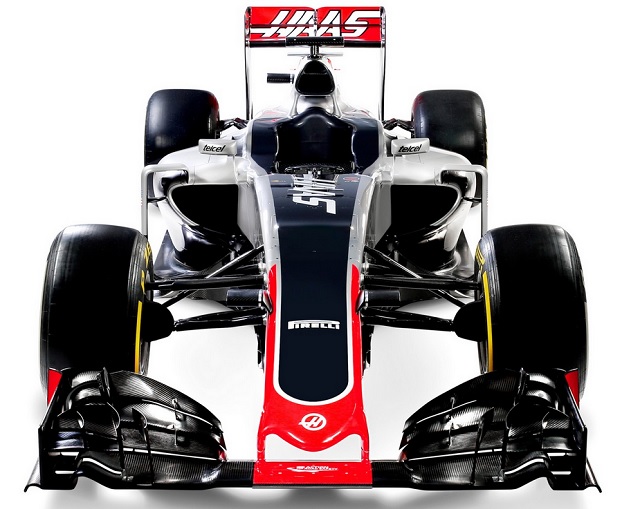 The livery is based on that used by "parent company" (i.e., both are owned by Gene Haas) Haas Automation's machine tools.  Indeed, the car's "VF" designation comes from them, too.  The first machine design they sold was called the VF-1, short for "Very First".  As an aside, the Navy fighter squadron VF-16 flew off the second USS Lexington (CV-16) and were known as "The Fighting Airedales."

The overall design is reminiscent of both the 2015 Ferrari SF-15T and the SF-16H.  This should come as no surprise to anybody, since the two teams have a very close technical partnership.  Not only is Haas using the 2016 Ferrari powerplant, they also purchased as much as the tech regs allowed from the Italian team.  Thus the suspension and gearbox, as well as incidental parts (like brake ducts) are also Ferrari-made.  The rest of the design is all Haas, however, and was produced by Dallara for the team.

There's an interesting wrinkle on the nose just behind the suspension mounts.  The general school of thought at the moment is that its for some aspect of the suspension, but nobody knows for sure.  The tip of the nose is more Mercedes than Ferrari, as it has no proboscis.  Obviously there's no way to compare the design with prior Haas cars, but it can be said that it's not quite as refined as, say, the Ferrari bodywork.  The sidepods are a little larger, the rear of the car is not as tightly packaged, that sort of thing, but you'd expect that from a first-year design.  You don't take as many risks on your initial go-round.

Haas F1 wants points in its initial season.  Normally I'd think that was impossible, but for Haas, maybe not.  Unlimited windtunnel testing for the past year, plus the partnership with Ferrari, has presented the team with unprecedented advantages over prior new teams like HRT or Virgin.  Let's see if they have taken full advantage... testing starts on Monday!

1 Do we know who their drivers are yet?

2 Lettuce Grosjean and Esteban! (Gutierrez).  Lettuce, obviously, has been driving for a while.  Esteban! drove for Sauber in 2013 and 2014, and was a test driver for Ferrari last season.

3 I imagine Grosjean can get points if the car supports him.  Gutierrez is 24, so unless he's a late bloomer (and keeping in mind we're talking about people who live in rarified air here) I'm guessing he's mostly a seat-warmer until the team proves itself.  This all spoken with the normal caveat that I know very little about F1 racing.

4 But now that I've ruminated a bit, I have a vague impression that Esteban! had a couple of good races for Sauber.  His "minor league" career was certainly promising.

6 The reason Esteban! is in the second Haas seat is really quite simple: Ferrari wanted him there.  Oh, to be sure, his TelMex sponsorship certainly doesn't hurt, but the Scuderia wanted to get him more track time with an eye towards a possible promotion to the Red Team sometime in the future if he does well enough.

The partnership between Haas and Ferrari is really just about one step below full B-Team status... except Haas really doesn't like that appellation.  He's made it clear that he's NOT Ferrari's B-Team, and never will be.

I'm sure having Esteban! in the seat got Haas F1 some serious discounts on engines/gearboxes/etcetera, though.

7 That makes sense.  Sponsorship and patronage in Formula racing is something a lot deeper than in most other sports, I think.

8 I sometimes run Haas machines at work, so that livery is pretty much exactly what I was expecting.

I've already had to explain to two Europeans why the American flag is "backwards" on the right side of the car.

9 I went to Corpus for Christmas break and visited Lex. Took about 3 hours to complete all 5 tour routes.