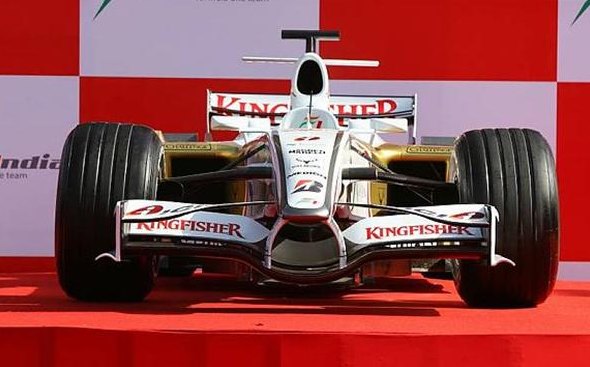 Yowza!  Force India debuted its race livery today in Bombay (or do you say 'Mumbai'?), and while I don't like it as much as their testing colors (where'd the crimson go?), this is still a very handsome car.

Officially, the colors are white, gold, and titanium (the stripe running from the cockpit to the nose and back).  I've racked my brain, and I can't think of another team that used gold at all... should be an interesting contrast with the McLaren.

Unfortunately for us, the rollout didn't have any good shots from the side or top, but click below for the centerfold: it's worth it. 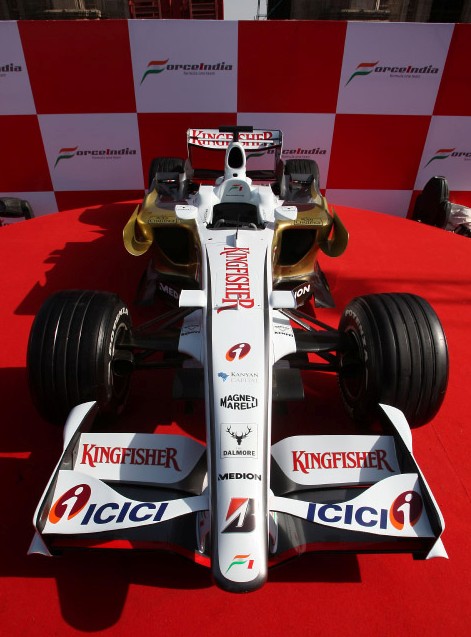 Okay, let's take a look at the chassis.  The first thing to leap out at me are the odd towel racks hanging off the sidepods.  I've thinking that they're an attempt to add a set of wings to the middle of the car without actually having wings, y'know?  If they were farther forward, I'd assume they were to channel air into the cooling ducts, but that's not the case.  So, strictly aerodynamics for sure, maybe directing the air over the rear wing?

I'm lovin' the front wing shape, too.  It's better seen in the first shot, but there's something about it that makes me go "wow."  It's the twist on the top plane, I think.

But, again, it's a trollop in fancy dress.  This WAS the Spyker, remember, and they didn't come any worse than that.  Maybe the solid influx of cash brought by Kingfisher will change the team's fortunes, but it won't be anytime soon.  I'd say their goal for the season is to get more than a couple of points.

Oh, and before I forget:  NICE logo.  Very clever.

I suppose it's okay, but I loved that earlier paint job.  Why two paint schemes in one season, I wonder?

Eh.  The first one wasn't the official paintjob, just something they had while they were doing tests.

It's like Honda's all black car from testing in 2006, or McLaren's safety orange from the same year.

3 I don't know if it has been mentioned here before, but an old axiom of ship building was: If it looks right, it is right.  That later carried over into the aeronautics industry, and I'm sure race car design.  I've also heard it stated as: If it looks fast, it is fast (or will be).  Modern aircraft and F1 car design spends a lot more time on math and wind-tunnel testing these days and as a result we end up with things that look like they will never work, but do.  (I would mention the F-117, but apparently that files about as well as a bucket of bricks.  Though they managed to get the stealth part right by eyeballing it.)

I have a feeling that due to a much smaller budget and what have you, Force India is going back to the old way of designing aero.

When the first ones were built, they didn't scream. That's because the Allison engine originally installed wasn't as powerful as you'd like. The Brits got some of the original version for flight testing and their conclusion was emphatic: it's a magnificent airframe, but it needs the Rolls Royce Merlin engine.

And once they changed the engine, then it screamed.

5 Ah, but Farce Force India doesn't have that excuse, Steven... for they've got the same powerplant that Ferrari uses in their cars.

Allegedly.  In the world of F1 customer relations, the general rule of thumb is "we'll take your money and give you the very best of what we're not going to use ourselves."

I'm going to make up numbers here, but let's say that the engines going into the red cars generate 900hp.  I'm willing to put good money on Farce Force India's engines putting out about 875hp or so.  High-tech engines are like computer processors: you can have two come off the assembly line within minutes of each other, yet one will just be faster than the other.  The same is probably true of engines.

Maybe not a huge difference, really, but enough that Ferrari will always be faster than a customer car.

6 These guys are buying major component assemblies from people they're racing against?

I would mention the F-117, but apparently that files about as well as a bucket of bricks.  Though they managed to get the stealth part right by eyeballing it.

There's an interesting story behind that. The science behind the shape is based on the work of a Soviet radio engineer. The Skunk Works used his method for calculating the reflective properties of a geometric shape to design the worlds worst radio antenna. Then they just had to figure out how to make it fly.

That story starts on page 19 of this book. It's a great read.

9 Allison was a great engine, it just needed a turbo like the one P-38 had.

10 "Allison" was the name of a company that designed engines. And the Allison V-1710 did have a supercharger. But the problem was that to make it fit in the fusilage, they had to use an inadequate one. As a result, performance dropped off above about 17,000 feet.