F1 Pr0n: Ferrari F10! It's finally time!  The 2010 F1 rollout season is here, and as is traditional, Scuderia Ferrari has the position of honor.  They debuted their new chassis, the F10, this morning.  And here it is:

At casual glance, it looks pretty much like last year's car, but let's take a comparative glance at the 2009 F60, shall we? 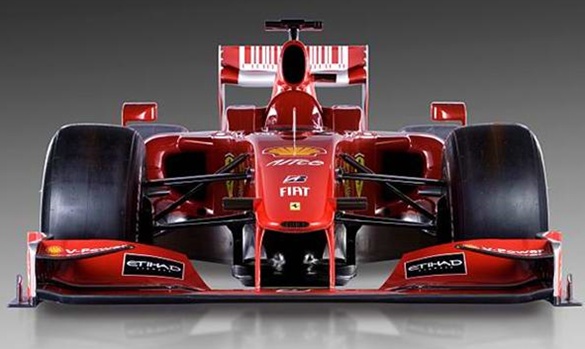 The first thing that leaps out you is the sidepods.  On the F60, they go straight across the top, but the F10 is curved, bulging at the outsides.  The nose wing is subtly different as well.  The middle element on the new car, where the Santander logo picture is located, just stops when it reaches the inner limit.  On the F60, they slope down to the limit point.  The air intake has changed, with a more squashed appearance in comparison to the 2009 car.  Other changes are visible on the rear wing and where the sidepods meet the monocoque; look at the Ferrari logo and you'll see what I mean. 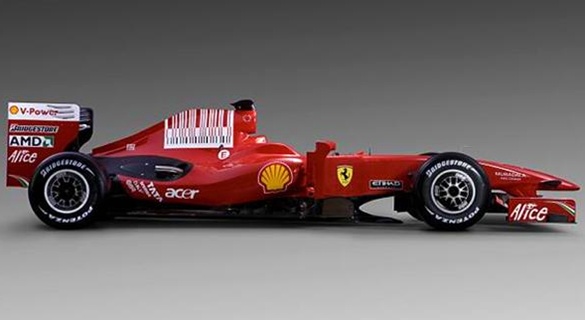 F10 top, F60 bottom
The side view is even more interesting, but perhaps in an even more subtle way.  The nose on the F10 isn't curved the way the old car's is.  The area from the mirrors back is chunkier (though still graceful); that's to accommodate the larger fuel bladder, since there's no refuelling this season.  In fact, the F10 as a whole looks less spindly to my eyes.

I like the way the airbox is rounded, but the shark's-fin is like a knife's edge sticking out of it.  Neat look there.  Sharper eyes than mine may notice that the front tires are narrower than the rears.  That, too, is a rule change, instituted to balance out the grip levels between fore and aft.  The teams actually requested that, and the FIA agreed to it.

Now, of course, we just need to find out if it'll GO or not.

Time will tell on that point.

So the only reason to go into the pits this year is for new tires?

I don't know if I like that. Pitstop strategy for fuel (2 or 3 times?) was part of the game, and a way that the team managers to be involved.

2 Look up the presentation by Ferrari design chief Nikolas Tombazis. He said most dramatic changes are in the rear suspension and structure that was widened to accomodate the double diffuser. The rest of the car was not changed as much. So pictures of the back would be most telling.

3 Steven, the teams still have to use two tire compounds/race, so there'll still be stops... they'll just be four seconds long instead of seven.  Historically, there have been quite a few more seasons that didn't allow refueling than those that did.  I actually don't mind the loss of fuel stops that much.  I DO mind the fact that the FIA screwed with the rules again, but I can live with it.

Pete, I'll see what I can find.

4 The good side of them screwing with the rules is that it's no longer McLaren/Ferrarri and a bunch of losers. The game is more competitive now.

6 You don't happen to know what is that sword they are carrying on top in testing?

7 It's an antenna for all the extra telemetry equipment the cars carry during testing, Pete.