Here's the trackmap... look at it and weep: 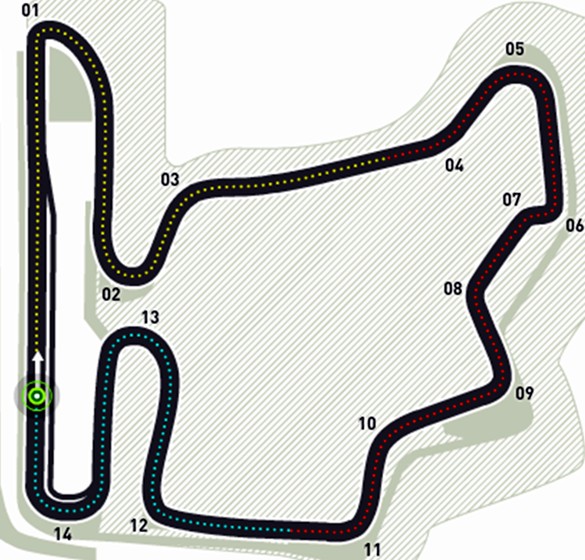 Occasionally called "Monaco without the glamour", the Hungaroring is one of the slowest tracks on the F1 schedule.  With only one turn that could remotely be called fast (#10, and even that's a nearly-90o bend), and one of the shortest straights on the calendar (only 700m), the main concept for the teams is to crank on as much wing as possible, coat the tires in superglue, and anything else they can think of to gain downforce.  Five of the corners on this track are taken at about 60mph... that's a huge amount.

The slow speeds and usually hot air temperatures throw in another problem for the teams: cooling.  Both the driver and the engine suffer mightily from the heat at Hungary.  While there isn't much they can do for the man, don't be surprised if we see huge radiator ducts and cut-away body panels at the back of the car.  Even then, we might see some overheating... unless it rains.

There's only one good passing spot here, Turn 1.  Unfortunately, the slow speeds and the processional nature of the track generally render the Hungarian GP a snoozefest.

Fear not, fellow F1 fans!  We here at F1 Update! will take one on the chin for you and deliver our usual stellar* performance for the race recap, so you won't miss a thing, and SPEED will do their usual good work on bringing us the sights.

On Sunday, however, we switch over to FOX (for the last time this season) from 2pm to 4pm for tape-delayed coverage of the Grand Prix of Hungary.

In other F1 news:

*As expected, Jamie Alguersuari was officially named as the driver who gets SeaBass' recently vacated race seat at Toro Rosso.  Just in time for the cars to get a much needed aero update... don't be surprised if the youngest driver in F1 history scores a point, and makes SeaBass look just that much worse.

*Danica Patrick recently told the LA Times that she's not interested in driving for USF1 next year. "I'd say it's probably not F1," she responded when asked what series she'd be racing in.  "I've had opportunities to take it a step further with Formula 1, and I don't want to lead anyone down a path. It's not in my heart to go there. I've explored Europe before.  I particularly like to be here and I like my family and I like my friends and I like my creature comforts of my home country."  Unless Bernie Ecclestone, misogynistic gnome that he is, leaves the sport, we'll probably never see Patrick in a F1 car.

*There are reports that Nelson Piquet Jr needs a good showing at Hungary to save his seat.  The official Renault press release for Hungary says that he's "targeting a top-10 grid spot and points in the race."  After Hungary, F1 takes another three-week break, which would be an ideal time to kick Piquet to the curb.  There's ominous music in the background...

*Max Mosley has officially stated (again) that he won't run for re-election as FIA President.  Until we (metaphorically) see his body buried at the crossroads with a stake in his chest and his mouth full of garlic, I won't believe he's gone.  Maybe not even then, if Jean Todt gets elected in his place.

*"stellar" in the same way that brown dwarfs and black holes could be called "stellar".

1 If it's so unpopular, why do they keep on having races there? Surely there must be a better track in that area somewhere.

2 Because they (being the Hungarian gov'ment) pay Darth Bernie quite a lot for the right to host a GP.  Nothing more, nothing less.

Silverstone is one of the most popular tracks ever in F1.  The drivers love it, the teams love it, the fans love it... and because Bernie wants more money, Formula 1 is leaving to go someplace that (theoretically) will give Bernie what he wants.

Which is also why we have races in Abu Dhabi and Bahrain, by the way, and not Canada or the United States...

3 I suppose I really should have known that without you having to tell me.

4 It's safe to say that if you can't figure out why something is going on in F1, it's because of money.

Piquet Jr is lucky he doesn't drive for Toro Roso.  After a couple of weeks of rumors, SeaBass was gone, but that same "driving for his career" rumor has been hanging over Piquet's head for months now.   Buh bye, already.

Any word on Zsolt?

6 Haven't heard anything yet, but I'm hopeful for some exclusive news...