F1 on TV: Germany! Once upon a time, Hockenhein was one of those courses.  The type that could make a brave driver shuffle his feet around nervously before he got into the car.  The type that made worms out of the less brave.  It was the track that killed the man that may have been the greatest driver F1 had ever seen, Jim Clark, in a worthless Formula 2 race (for those readers who don't know, F2 was essentially a feeder league for F1, much as the Nationwide series is for the NASCAR Sprint Cup series... and, just as in Nationwide today, the guys from The Show often raced in the junior series).

Then Hermann Tilke got a hold of it.  Now it's just another track, and they don't even race at it every year; the last time F1 visited Hockenheim was 2006.  Still, there are some decent bits to it: 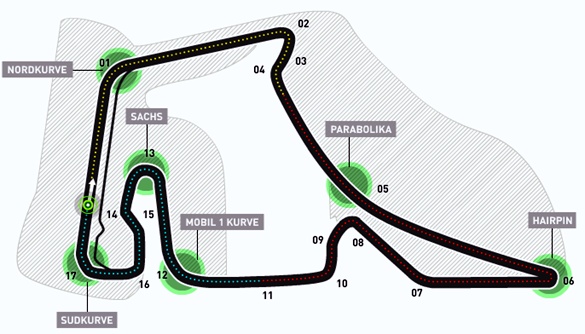 Like most Tilke tracks, it's got fast parts followed by flow-wrecking kanoodling bits.  The main straightaway, aka "Parabolika", isn't really straight at all, which makes drafting a bit of a challenge.  Like Silverstone, the first turn (the Nordkurve) is usually taken close to flat out, which makes turn 2 the real bottleneck on the opening lap.  The Stadium Complex (turns 12-17) requires a lot of grip, which makes getting the balance between low downforce (high speed) and high downforce (high grip) a very tricky thing for the teams to handle.  Turns 16 & 17, while separated by a short chute, are usually treated as one big double-apex turn by the drivers.

The bit that'll make this really interesting is that, other than last week's test session, none of the teams have really run here in the new-spec cars.  In 2006, engines were screaming at 20000 rpms, there was traction control, and so on and so forth.  Now, though, no TC and engine limiters have probably changed the way the teams look at the circuit.  It was tough on tires to begin with, for example, but now?  Well, there's a reason Bridgestone is bringing the Hard and Medium compounds to the track.

On the TV front, this is the last time this season we'll have to suffer through the race being on FOX.  Coverage first begins on Friday, from 7a-840a, with SPEED showing Practice 2 live.  Saturday brings us Quals from 7a-830a, plausibly live on SPEED.

Sunday will be a teeny bit different, however.  SPEED is going to be doing their normal pre-race show from 1130a to Noon.  Then you have to switch over to FOX for the German Grand Prix, from Noon to 2pm.

As is normal for FOX broadcasts, SPEED will be replaying the race on Wednesday from 1130a to 130p.  They may show the pre-race show as well, so tune in at 11a to be sure.

And to see what Hockenheim used to be like before Tilke got his claws into it, click 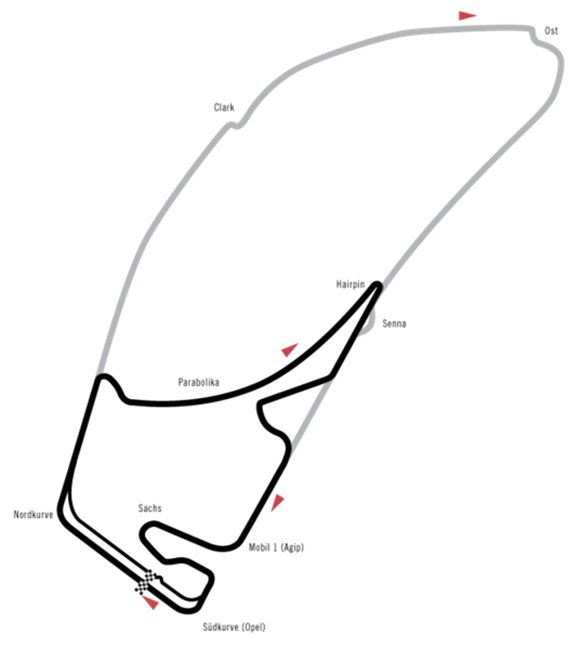 The sections in light gray were removed for the new course, in black.  The best part was, once you exited the Nordkurve, it was a high-speed blast into a forest, and the fans basically couldn't see the action back there.  The cars didn't really reappear until the Senna chicane, more or less.  A lovely track, though impractical and dangerous in this day and age (much like the original layout of Spa-Francorchamps).

1 The problem with the old track was that the cars were out of sight of the fans for two thirds of the track. I can understand why they changed it.

2 Not being able to see 2/3rds of the track from any particular seat is actually quite common.  Monaco, for example, or Montreal and Monza (forests), Sepang (grandstands down the middle of the circuit), Spa (rolling hills), or Magny-Cours (sleep).  That's why they have the giant view-screens at strategic locations, so the fans can watch the action.

They took the forest section away for safety reasons;  The ostkurve was a very long way away from the rest of the track, and the medical car took a long time to get there from the stadium section.

But at tracks like Monaco, while it's true that no single spectator can see the whole track, virtually the whole track can be seen by someone. (The only exception would be the tunnel.)

On this track in its old form, two thirds of it wasn't visible to anyone except track officials, presumably stationed all over the place to call for help when need be.