F1 On SPEED!: Malaysia 2012 After a long long offseason, we find ourselves blessed with back-to-back races!  After the... shall we say eccentric Melbourne circuit, the F1 Circus packs up the tents and takes an eight-hour flight to Kuala Lumpur, home of the Sepang International Circuit and the Grand Prix of Malaysia.  Let's take a look at the track map: 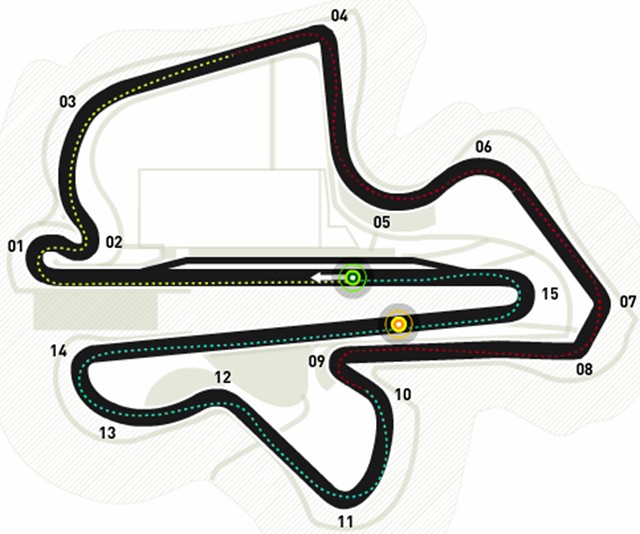 It takes not much of a look to realize that it's our first Hermann Tilke design of the season.  The two loooooonnnng straightaways are clever, I suppose, but that's about the only nice bit around the circuit... though under duress I will admit to a fondness of the Turn 1/2 complex, what with its downhill, off-camber profile and all.  There's something sickly amusing about seeing cars worth untold millions of dollars descending and twisting with one tire off the ground, which has got to do bad things to a car's mechanical grip.

Which is important to have when the aerodynamics are compromised, which appears to be on tap for this race.  And I use "tap" the way you would with a sink... yep, we're scheduled for rain for all three days.  And not just "rain", but "big sloppy buckets o' rain with enough lightning to impress Pink Floyd's lighting designer."  And rain makes EVERY race better!  Which would be nice, because the last two have been, to be blunt, dogs, and the best part of the 2009 race was that it was red-flagged and never resumed.

Fortunately for us, the good juruhebah of the Legendary Announce Team will have their Mae Wests handy as they bring us their usual spiffy coverage of all the action.  Here's the lineup:

As is usual for this time of year, this weekend is my fantasy baseball league's annual player auction, which is scheduled for Saturday morning.  The Quals report will be delayed until after that, the Practice report may never occur as I do research, and even the F1U! is in danger of being shuffled around as I may have something going on that day as well.  Depending on what The Librarian and I are doing, I might do a liveblog of P1.

I've been in this particular fantasy baseball league since 1987... yes, there are upperclassmen at Duck U that are younger than my fantasy team. As much as I love F1, baseball is life.