It appears that someone at the FIA actually listened to the plaintive wails echoing throughout the world last year.  As incredible at it may seem, in 2007 we went THREE WEEKS between the Aussie and the Malaysian GPs, waaaay too long for fans and teams alike, I'd wager.  One week, though?  Plenty long enough for us fans!

We start with Practice LIVE from 1am to 230am on the morning of Friday, March 21st.  Maybe a little too early to watch as it happens, but what can you do when the action is happening on the other side of the planet?

Now, here's where it gets tricky.  See, as I mentioned last week, speedtv.com recently revamped their entire website, including the tv schedule page.  While most of the site works just fine, the schedule page is pretty much broken.  So while the listed time for F1 Quals LIVE is 1am to 230am on Saturday, March 22nd, I'd be careful about setting your VCR for those times, exactly.

The same applies to the LIVE race times... it's listed at 130am to 4am, Sunday March 23rd, but again, the schedule actually claims it's the practice from Australia, too, so...

However, I think I'm on pretty secure ground when I state that the REPLAY of the race is from 1230pm to 3pm on Sunday, March 23rd.  That's Easter Sunday, of course, so gather your family around the screen!

Finally, I can't NOT post this screenshot from the ITV coverage of the Aussie GP: 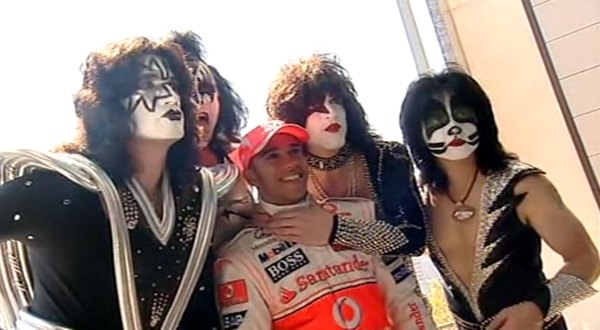 Love the helmet on the Duckie.

Thanks for the race times, although I'll probably be missing most of the live stuff.  I need my beauty sleep.  ;-)

2 I probably won't be watching the practice and quals live, that's for sure... maybe, MAYBE I'll watch the race live, but don't bet on it.

5 "The ersatz Paul Stanley of the Melbourne Kiss Appreciation Society attempts to remove the lid of his life-sized Lewis Hamilton cookie jar."