F1 on SPEED!: Korea 2011 After Seb Vettel clinched the Driver's Championship at Japan, one might be inclined to think there's nothing else to race for.  In NASCAR or the IRL, you'd be right.  However, this is Formula 1, which has always been a Constructor's marque.  Certainly it's nice to have the World Champion driving for you, but the Constructor's Championship is where the money is.  The financial difference between finishing first and finishing second is in the tens of millions of dollars.  So you betcha there's still something to drive for, and this weekend the F1 Circus heads to Yeongam, South Korea for the second Korean Grand Prix.  Let's take a look at the track map: 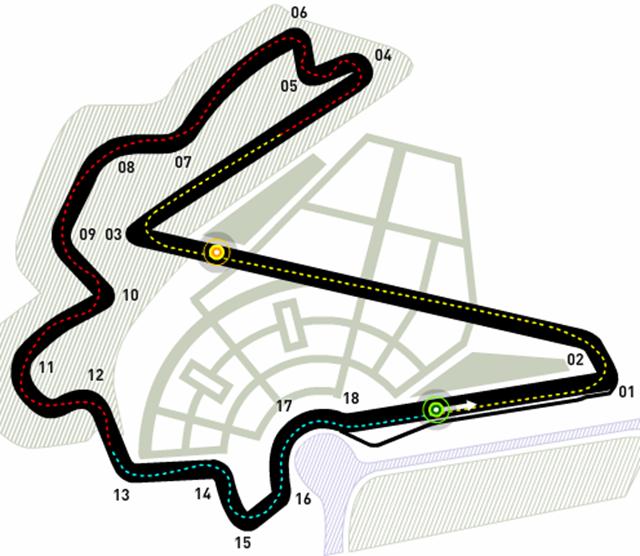 As you may remember, last year's inaugural race was mostly an aquatic affair, and when it finally stopped raining the track never dried and the sun went away.  It's hard to judge just exactly how this circuit runs, since we never saw any dry-weather racing the whole weekend.  In practice and Quals, the track surface proved to be both slippery and abrasive at the same time... and that was on the more durable Bridgestone tires.  With Pirelli bringing the soft and super-soft tires to the circuit, lord only knows how long the rubber will last.

Of course, "lord only knows" also describes how the track'll ride this year.  In a move born out of desperation, the race organizers surfaced the track in a fast-curing asphalt that had a high oil percentage.  This guaranteed that the course would be ready for race weekend, but also guaranteed that the surface would be permanently greasy.  However, that was last year.  The track has had a year to weather in, and while I doubt it'll be great, it'll probably be better.

One of the problems last year was that the heavy rain that fell had no way to drain.  The long straightaway is lined with concrete walls, and those walls contained the water like a swimming pool.  Everywhere else the problem was that the track is built on reclaimed swampland that's just a few feet above sea-level.  It was like pouring water on a sponge; it can absorb to some level, but after that it just can't take any more.  Fortunately, it looks like we're to have a dry race this year... maybe.  Who knows?

That reclaimed land also began settling almost as soon as the asphalt was put down, leading to a rather bumpy surface in some very uncomfortable places... mostly braking zones and the apices of turns, it seemed.  I doubt they could fix that, short of resurfacing the track... and they surely didn't do that.

So what this race preview comes down to is that we have no freakin' idea what the track will be like for this weekend's contest.  Let's not even think about what sort of effect DRS will have!  In any case, we'll find out thanks to the good folks at SPEED!  As usual, they'll be bringing us coverage of every session of the weekend!  Here's the lineup:

Along with the Legendary Announce Team, the F1 Update! crew will be all over the weekend as well!  Hope you'll join us, exclusively at The Pond*!


*no other place wants us.

I've tried a couple of times to find this track using Google Earth, and could not. Today I tried doing a search for "Korean International Circuit longitude latitude" and found out the exact coordinate.

And now I know why my previous searching was a failure: Google's photos of the area in question are from March of 2004. Back then, there wasn't anything there except what looks like rice paddies. (Just a guess.)

2 Wonder if that one really big hump is still there?

3 What, The Elephant?  I'm sure it is.  From the first camera angle we saw, it looked huge, but from the side it's more of a gentle swell in the ground.  Big enough to hide cars, yeah, but it's over the span of 50 yards, not the 10 I thought.

I'll still call it The Elephant, though.

"It's going to be tough," Jensen Button quoted by Autosport. "The softs are pretty tough tyres to do a long run with anyway, so with the supersoft it is going to be interesting. You could see a lot of stops here. We can only have five stops, we can't have any more, but I think we might be using all of them.

"Qualifying is going to be interesting, as you don't want to flat-spot a tyre, because you are going to need them all maybe. And then we have India, which is a fast circuit like Suzuka and at the moment is 35 degrees, so it's going to be like Suzuka but even hotter, so even tougher on tyres. So we have a tough couple of races coming up. It's not just about sheer speed, it's whether you can look after the tyres or not."

This is such a strong point to make, tire strategy will be key & I think Jensen has the advantage over Lewis, Seb & HHMNBN. I hope it's a good race, it has all the makings of one.