F1 on SPEED!: Korea 2010 The F1 Circus pulls into a brand new venue this week, the Korean International Circuit at Yeongam.  There's been a terrible amount of hand wringing regarding the condition of the layout over the past month or so, but how will it really run?  We're about to find out!  Let's take a look at the track map: 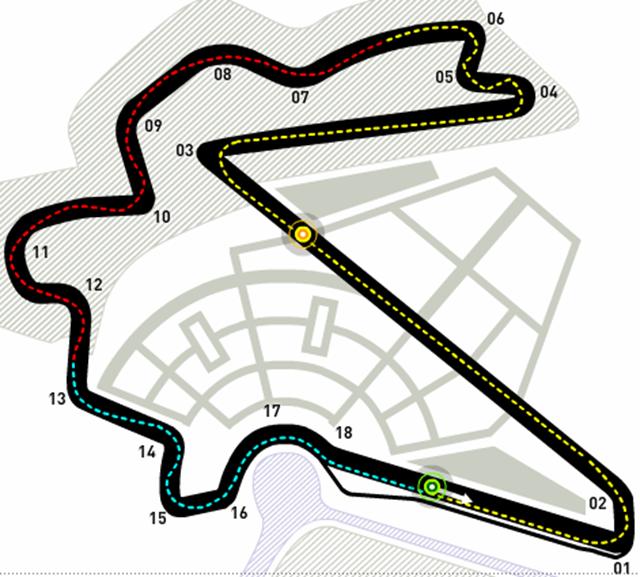 A brand new course is always an exciting time for F1, as nobody has any idea what to expect.  While eyewitness reports from Yeongam are somewhat troubling, they're mostly referring to ancillary subjects though two things from reader David's forum are worry-making.  Missing drain covers, for example, remind me of the Chinese Grand Prix of 2005, when Juan Pablo Montoya lost out on a podium finish when a loose cover broke his car.  Failing curbs might do the same thing.

Then there's the track surface itself.  Fresh asphalt is going to be slippery, which'll play hob with downforce levels.  Predictions have the teams setting their cars up like it was Suzuka, sacrificing top speed for grip.  Yeah, that long straight looks drool-worthy, but there's a lot of curves in the back half of the track and being fast there will pay off more in the long run.  Lord knows how the tires will respond... I'm assuming that Bridgestone will be conservative with compound choice here, perhaps bringing the hard and soft rubbers.  The teams have high-tech simulators, and have been "driving" around the layout for the past month, but there's only so much a sim can tell you.  Yes, you'll know the best line through the track and how long you'll be at full throttle, but until the cars take the track for the First Practice session, they won't know.

Fortunately, we've got SPEED and the Legendary Announce Team to guide us through the whole weekend.  The best news of all is that we'll be able to see that first practice session, Thursday night from 8pm to 930pm, on speedtv.com.  I'll be watching, for sure!  After that, coverage shifts to the network, with Second Practice coming from 1159pm to 140am Thursday night to Friday morning.  Thankfully, I've got Friday off from the Duck U Bookstore due to "Fall Break"!

Qualifying is Friday night, beginning at 1159pm and rolling until 130am Saturday morning.  Finally, the broadcast of the first-ever Grand Prix of Korea will begin at 1230am Sunday morning, going until 3am.  There will be a replay from 330pm to 6pm Sunday afternoon as well.

We'll probably be watching a F1 race taking place in a construction site, but it's a F1 race nevertheless!  Of course, F1Update!'ll be all over it all weekend, and we'll see you here then!

2 What do you think about the track layout? Any good passing spots? (I haven't been doing this long enough to tell from the map...)

3 Av, the obvious passing zones are Turns 1/2, Turn 3 and (maybe) Turn 4.  Any chance you have to outbrake someone after a long straight gives you a passing opportunity.  I'm not sure about 4, simply because the whole 4/5/6 complex may insist you get on the racing line or lose ridiculous amounts of time.  We'll see in P1, maybe.

Steven, you and me both.

4 There has actually been a surprising number of good (or at least 'interesting') pass attempts in the multi-turn complexes this season. Most of the complexes on this layout have a sharp corner in the middle which probably ruins that, but I wouldn't be surprised if we see some passing in 7-8-9, 11-12, and 15-18. Of course, it might end up being the kind of passing that leaves carbon fiber on the track and people arguing over who was at fault for weeks, also.

5 After last week, I'm only betting 50/50 that all the cars can make it to the starting line without an accident.

Looking forward to the race on the brand new track and hoping for the best.

Also, NASCAR Race Hub showed a very different version of the potential Korean track in a broadcast earlier this week.  They filled in the "virtual" blanks in the middle of the track, and it was a full of skyscrapers.  It looked overly ambitious.

7 Mal, believe it or not, that's the original design vision for the track.  The area opposite the marina is supposed to have a small city... office buildings, a hotel, all the works.

For some reason, the credo of Top Gear comes to mind: "ambitious but rubbish."