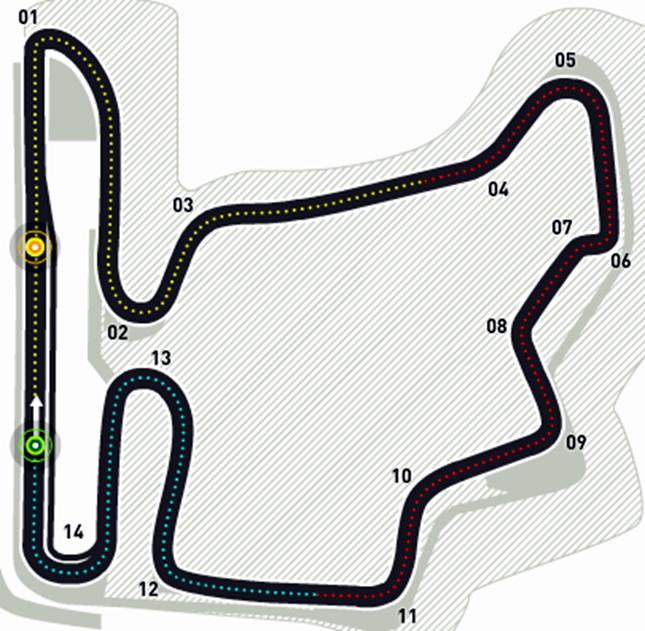 It's glorious, isn't it?  It's been described as "Monaco without the glamour."  But that's a good thing!  Without the glitz and glamour, all that's left is to concentrate on the racing.  Set into a natural bowl, most spectators can see the majority of the track from their seats.  It has little altitude change, but is bumpy due to being built on relatively sandy soil.  The twisty layout makes passing difficult, emphasizing driver skill over speed.

Like Monaco, the Hungaroring is a high-downforce low-speed track, where maneuverability outweighs grunt.  Since the Grand Prix is pretty much the only race run on the Hungaroring, the track is usually dusty and "green" at the start of the weekend, but traction improves while the various sessions are run and the circuit rubbers in.  Rain can wash that rubber off of course, but there's only been one wet race in the 25 year history of the Hungarian Grand Prix, in 2006.  That race was Jenson Button's first win, in fact.

As the race is run in late July, it's always hot and humid here.  The natural bowl keeps a lot of the daytime heat, meaning there's little relief.  This makes keeping the cars cool an exciting challenge for the mechanics, and you'll often see various pieces of bodywork removed around the engine area to promote airflow.

Ah, Hungary.  To be in Budapest in the summertime, watching the Grand Prix... is there anything better?  Fortunately for those of us who can't experience the wonderment, the Legendary Announce Team will be bringing us everything with their usual talent and aplomb... and even better, it'll all be back on SPEED!  Let's take a look at the schedule:

So whip up some bundáskenyér with körözött, settle in on the couch, pop open a Soproni, and hope for a Zsolt Baumgartner sighting!  We'll see you then!


Do you have any idea how difficult it was to make the Hungaroring sound appealing?  God, I hate this race.  The only time we've had a good race in Hungary was the wet one in 2006.  Hopefully the new tech regs will make a difference, but jeez, I'm not hopeful.  I'll still be watching, because that's my job.  Hope you appreciate it!

OK, I get you now. I was thinking to myself, "I thought he loved Monza the most..."

2 Silverstone is probably my favorite circuit, followed by Spa and Monaco and Japan.  Then would come Monza.

The Hungaroring is probably my least favorite, with Valencia racing it for last place.

You did a superb job of making the Hungaroring sound appealing!  :-)

Trust me, I've got my fingers crossed for a Zsolt sighting.