F1 on SPEED!: European Grand Prix at Valencia 2008 Now that the F1 vacation is drawing to a close and the teams are loading up the transporters, it's time for us to put our race caps back on and take a look at the first of the two new circuits on the calendar, the street course at Valencia, Spain. 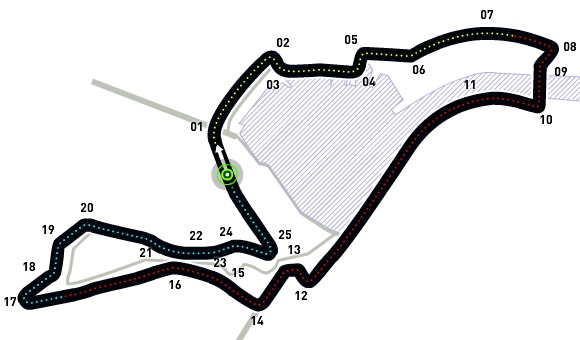 Usually when you think of street tracks, you think twisty and very, very slow.  With 25 turns, Valencia certainly qualifies for the "twisty" part, but hold on a second!  If you look at them, there's very few of the speed-killing, 1st-gear-loves-me type of turns (three, to be exact: numbers 10, 17 and 25), though the 12-25 complex is overall not visibly quick.

Unlike Monaco, however, this track is fast.  They're expecting the F1 cars to be hitting over 200mph before braking for 12, and just slightly slower than that on the run-ins to turns 2 and 17.  It's also wider and (unfortunately) flatter than Monaco, so there shouldn't be too many times that cars can't physically get by one another.  Still, like any street circuit, there is little to no runoff area, with the track bordered by concrete barriers, so if you make a mistake here, you've got a broken car.  The exceptions to this are turns 10, 12, 14, 17 and 20, all of which have some extra space (but not all that much).  There's even a short bridge here, on the short straightaway between turns 9 and 10, which I predict will be the track's signature.

There's recently been some running on the layout, the most appropriate for our purposes being a F3 race.  What's really nice about that is that we now have some hot lap footage from their practice sessions!  A well-annotated video can be found HERE. Open it in a new window, and watch it with the track map handy.  Early fears were that the new asphalt could not handle the stress may have been proved correct, but weak spots were identified and either have been or are being fixed, so that shouldn't be a problem... they hope.

After watching the footage, it doesn't really feel like a street circuit.  You're only running in built-up areas from around turn 22 to turn 5.  After that, you're going around a harbor area.  To me, the track is kind of like Melbourne.  Technically a street circuit as well, Melbourne runs through a park area on city roads blocked by armco barriers... and while the layouts are completely different, the two tracks just seem the same.

I'm not sure I'm overly fond of Valencia's track, to be honest.  Something feels... off... about it to me.  Like Hermann Tilke tried to force it to be one of his Adventure circuits ("You are in a maze of twisty little passages, all alike") but couldn't quite manage it.  That's the beauty of new tracks!  I wasn't sure I liked Turkey, either, but now it's one of my favorites.

But to find out for sure, we have to watch, and that's where our friends from SPEED come in!  Coverage begins with one of the most important practice sessions ever live on Friday, from 7am to 840am.  It'll be only the second time the teams have been on track, and while simulations are nice, nothing beats putting rubber to the road.

Saturday, from 7am to 830am, brings us plausibly live coverage of the first ever Quals sessions.  I expect to see a LOT of action, with all cars on track as much as possible, which is different from the more established circuits.  Drivers have to learn the course, after all; again, simulators help, but it's not quite the same.

And then comes raceday!  Sunday, from 630am to 930am, the Legendary Announce Team will provide coverage for the first ever F1 race from Valencia, Spain!  It's been a long wait, but the F1 Circus is back on track.  Expect a wide-open field for this one; new circuits give the advantage to the team that can give the best setup in limited running.  Expect Ferrari and McLaren to do well, of course, but BMW-Sauber may well struggle: their car appears to be tough to get right at the best of times, with lots of accumulated data to work from.  Honda's test driver drove in a GT-series race here, so he'll be able to give the team a lot of good advice.  Everybody else?  Crapshoot!  There'll be a replay on Monday, from 1130am to 2pm as well.

This should be interesting, to say the least, and the F1 UPDATE! team will be along for the whole ride!

1 There sure better be some sort of barrier on the edge of turn 4, because if you miss that one you end up wet. Jeeze.

2 Oh, there is.  In fact, all the way around the track there are concrete walls with catchfencing atop them.  In the runoff areas mentioned above, the walls are just set back aways.


From the trackmap for the new course in Singapore, it'll be even easier to get wet, as the one of the straightaways is actually a fairly long bridge.  One flat tire at speed and it could get very ugly.  It'll be interesting to see what sort of barriers they put up for that.

3 I am really looking forward to this race.  I love the street courses.  It will be like a mini-trip to Valencia next weekend!