F1 On SPEED!: China 2012 And we're back to the Circus!  After what will be a three week layoff, the teams have made their way to Shanghai for the third race of the year, the Grand Prix of China.  Let's take a look at the track map for the Shanghai International Circuit... 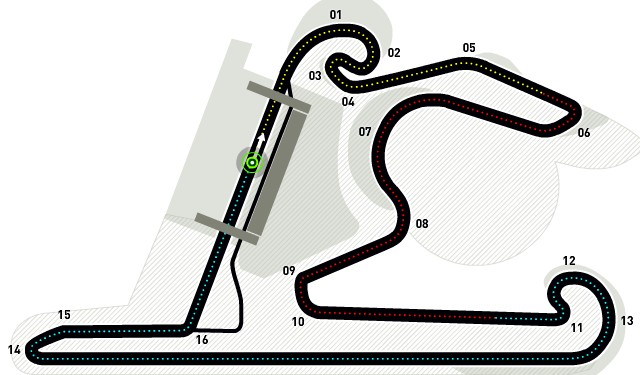 Hermann Tilke's stink is all over this one, it's true.  As much as I'm not particularly fond of the layout, there's no doubt it's given us some really good races in the past few years... heck, in 2010 it was the race of the year.  With this season's lack of predictability, who knows what we're gonna see this time around?  Let's hope it's a good one, because it might be our last race for another month.

There is a growing movement to cancel the Grand Prix of Bahrain again this year; the government is still doing Very Bad Things to the citizenry, the protestors have vowed to cause nightmares aplenty at the Grand Prix, the teams are twitchy about their safety... in other words, exactly like last year.  The GP of Bahrain is scheduled for 4/22.  The next race after it is Spain, on May 13th.  Well, if nothing else, the teams'll have plenty of time to put their changes on the cars before Catalunya.

Makes for a rather disjointed season, though.  F1U! will be around, doing our best to keep the readers interested, though.  Fortunately, we'll have the aid of the good burghers of SPEED's Legendary Announce Team, bringing us all the action.  Here's their schedule for coverage:

I might be attempting a liveblog for P1, and will definitely do so for P3.  The Quals writeup will be late; there's a registration event at Duck U Saturday, and I'll have the Bookstore open from 10a to 3p to serve the incoming fledgelings.

We'll see you right here then!