F1 on SPEED!: Brazil 2011 After 18 races across 17 countries, the F1 Circus pitches their tents for one last time for the final race of the season.  This time, we find ourselves in the Brazilian city of São Paulo, racing on the track formally known as Autodromo Jose Carlos Pace, but more commonly known as Interlagos.  Let's take a look at the track map: 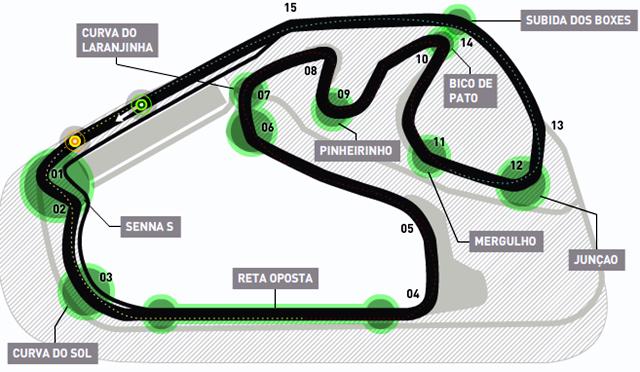 It's no secret that I dislike the circuit at Hungary, nearly to the exclusion of all others.  The one track I despise more than the Hungaroring is paradoxically one of the more popular races amongst the F1 drivers... this one.  To be honest, my dislike of this circuit has nothing to do with the track itself.  Indeed, this is the sort of layout I would quite like normally.  A lot of elevation change (the run from Turn 1 to the end of Turn 3 is all downhill, and from Turn 12 aka Juncao to Turn 15 is all uphill), fast sweeping turns, a "technical" section that is relatively inoffensive... it's a challenging track, and one that's really quite appealing.

Except I hate it.  It's completely irrational for me to dislike Interlagos, but there's an emotional aspect involved.  As I've mentioned in the past, it always feels gray on race day (even when it isn't).  The racing line for Turn 15 goes right through the pit-in, and with the positioning of F1's cameras at Turn 1, looking all the way down the front straight, it always looks like cars are going to crash into the pit lane barriers at 170mph.  The pit out is the longest in F1, too.  Furthermore, the track is positioned between two man-made reservoirs that provide water to São Paulo, leading to the name "interlagos," literally "between lakes."  The pressure of the water has caused the surface of the track to wrinkle, leading to a very bumpy surface.  A resurfacing in 2007 did not entirely solve the problem.  All of these things make this a track I really don't like.

The fact that it's the final race of the season might have something to do with it, too.

Still, this is what we've got this week and it's not a Tilkedrome, that's gotta count for something.  Pirelli is bringing a new soft tire compound to the race, one that they say is less conservative than the previous rubber.  The medium compound will be the "hard" tire this time around.  Interlagos isn't a particularly hard track on the tires, so expect the softs to last for a while... unless Pirelli has put the razor blades back into the compound like they did back at the beginning of the season.

And then that's it until January, when we'll start to see F1 Pr0n with the rollouts of the 2012 cars.  Of course, F1U! will be all over this weekend, with a desperation born of the end of the year.  It helps that the whole weekend is at times where I can actually watch it live!  We'll see you then!

1 Big, big milestone for Massa, it's his 100th GP. I think the tires will be key but it's a tough track on powerplants so that'll be a factor. Nice not to get up the the middle of the night to see a race also. I look forward to your wrap-up of the season, you offer better analysis than most.