F1 on SPEED: BRAZIL 2008! This is it.  The Big One.  The last race of the season, and it's all up for grabs.  Ferrari vs McLaren for the Constructor's Championship, Hamilton vs Massa for the Driver's Championship... and it's Massa's home track.

And I hate it.

Interlagos, which in Portuguese means "between the lakes", is positioned between (wait for it) two lakes which are actually reservoirs for the city of Sao Paolo.  But then, Interlagos hasn't actually been named "Interlagos" since 1977, when it was renamed "Autodromo Jose Carlos Pace", named for a F1 driver killed in a plane crash.  Drivers like the circuit, which bobs and weaves over rolling terrain, but the rest of the team's staff despise Interlagos, despite recent updates.  Unlike almost every other permanent track on the F1 calendar, Interlagos is actually located inside the city, and not a good part of it, either.  In 2006, Toyota staffers were attacked by gunmen on the way to the circuit.  Throw in the recent police strikes (and police on police rioting), and one can understand the dislike.

Let's take a look at the circuit map: 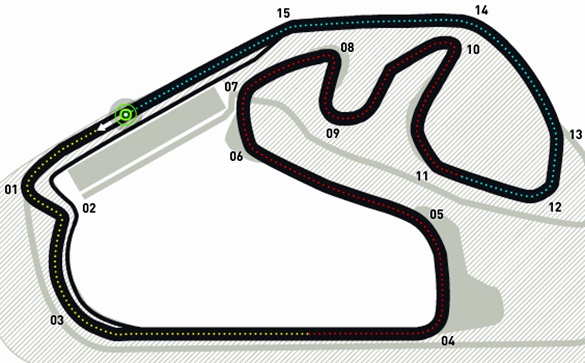 The circuit actually reminds me of the (now-departed) Indianapolis GP circuit, which I wasn't overly fond of, either: high speed, but with a really annoying "mickey mouse" section thrown in to ruin the design.  Further, Turn 15 makes me think, every stinkin' year, that someone is going to crash into the Pit In at 170mph.  It's just an optical illusion from the camera angle (placed near Turn 1), it still bothers me.  It is also one of the few counter-clockwise circuits on the calendar.

The circuit's concrete, though redone before last year's race, is very bumpy; the ground underneath the track is constantly in motion due to the pressure of the two lakes.  This causes the track surface to buckle and heave, causing the washboarding effect.  While it was better last race, what Interlagos calls "smooth" would be considered "rough" everywhere else.

Finally, the track has the longest pit lane in all of F1.  While it may be safer for all involved, it also removes cars from actually racing for an extended period of time.

Felipe Massa is historically good here.  He relinquished the lead intentionally to teammate Kimi Raikkonen in 2007, won in 2006, and was on pole both years.  This is important, as he MUST win to stand any real chance of victory in the Driver's Championship.  Even if he does, he'll still finish second to Lewis Hamilton if Hamilton finishes 5th or better.  Of course, the same situation applied last year and Hamilton peed it down his leg, finishing 7th.

Rain is forecast for race weekend, though it may not actually rain during the track times. There's a 40% chance of rain on Sunday, and 60% on Friday and Saturday.  If it DOES rain, the season is over right there (probably), as nobody is better on wet tracks than Hamilton, and Massa is... suspect in the wet.

Well, we'll see what happens, and thanks to the good folks at SPEED, we'll be seeing it all live!  Practice session #2 comes to us from 11am to 1240pm on Friday morning.  Quals, from 11am to 1230pm on Saturday, will be interesting strategy-wise.  Will McLaren short-fuel Hamilton to get him on pole, so as to avoid ANY chance of getting caught in the Turn 1 schmozzle, but throw away any chance of a win (which Hamilton does not need)?  Find out on Saturday!

Finally, race day.  Coverage of the Brazilian Grand Prix (that's a lot of Grand Prix!) begins at 1030am and goes until 1pm on Sunday.  Keep in mind that Daylight Savings ends early Sunday, so set your clocks back an hour!

Of course, the F1U! crew will be all over everything... see ya then!

1 Why doesn't the pit lane rejoin at turn 2? Or just after it? That's really strange that they went all the way down to the back straight before rejoining.

2 Man, Google Maps is useless for this one. There's a great big ole cloud right over the track.

3 A fine question about the Pit Out.  Who knows?  Just another reason why I hate this circuit so very much.

5 Going in on turn 2 would actually have been pretty good, because they would have been entering on the outside of the turn

YAY!!! Lots of live coverage this time.  I don't think I can manage many more the the middle-of-the-night races.

This ought to be an outstanding race, at least on paper.  Just hope it doesn't rain.

7 After further reflection, I may have come up with the reason: it's the bottom of a downhill section.  WHY that would make a difference, I dunno, but maybe that's it.