F1 On Speed!: Australia 2009 You have no idea how good it was to type that title.  Finally, all the blathering, all the complaining, all the bickering that is the F1 offseason is about to end.  Finally, all that matters is horsepower, downforce, speed and skill... because the 2009 F1 season is, finally, about to begin.

And where better than the quasi-traditional starting point for the season, Albert Park, Melbourne, Australia, or as I like to call it, "God's Slot-car Track."  Let's take a look at the track map, shall we? 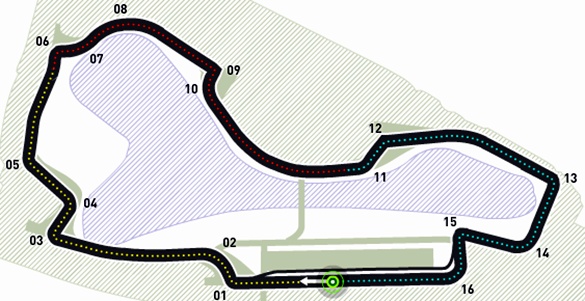 In some ways, Melbourne is the "perfect" F1 track.  It's fast, but has some nice turns that require good low-speed performance.  Yet many turns are high-speed and challenging (#5 and #11 in particular), where a brave driver can keep his foot in all the way through.  It's a temporary circuit with some sections that are permanent as well.  Smooth, but some bumpy areas (but not too bumpy) in the braking zones to challenge the suspension.  It's a great track for the drivers to get used to racing again (not like they haven't been driving all winter), easy but not too easy.

Having said all that, last year's race saw 14 cars break down or crash out, leaving only seven competitors to take the checkered flag (there was one DQ as well).  Ambient air temps around 100oF had something to do with that, of course, but reliablilty will be an issue in this race as well, what with the new rules and all.  This year's race will be starting at 5pm local time instead of 1pm, so the temps may be lower... or not.  It's weather, who knows?

Either way, the good folks at SPEEDchannel will be bringing us their usual excellent coverage all weekend long!  First off, we'll get LIVE coverage of Friday's second practice session from 1230am to 2am.  That's followed with (plausibly) LIVE coverage of the season's first Quals on Saturday from 1am to 230am.

But then it's time for the real deal: the Australian Grand Prix LIVE Sunday morning from 1230am to 3am.  There's also a replay from 330pm to 6pm on Sunday afternoon.  As usual, all times are Central.  East coasties, add one hour, y'all on the west coast take two hours away, and those of you in Guam, well, you're on your own for this one.

It's about bloody time.

1 You think Brawn will take the post? That would be awesome (and hilarious).

I don't know... which is a heckuva improvement over last year, when I would have said "no chance in hell" for Honda.

But it would be awfully cool, no question there.

Man, it's a beautiful setting.

Do they use the easy gentle turn at #9 or the sharp corner?

It looks like a very safe track. The only place I'd see any chance of an out-of-control car hitting something is turn 5. Everywhere else there's fields and gravel and lots of open spaces outside the sharp corners.

The "eye in the sky" view doesn't tell the whole story when it comes to Melbourne.  In many places, track is bordered by safety fencing, in some cases only a couple of feet from the asphalt.  The run-off areas that DO exist seem smaller than normal.

That's the problem with a temporary circuit, even one set in a park... as much as you'd like to have mile-long graveltraps, you can't do it because it'd cut into the picnic area (or whatever).

5 Here's to a safe season, hotly contested and hopefully with four or five teams in the hunt for the top step of the podium! I'm a Ferrari fan at heart, ever since I saw my first live F1 race in Long Beach in 1978 (Carlos Reutemann, Ferrari). But I must say, while I'll be rooting for Massa, what I want more than anything is some serious competition and lots of on-track action (not the post-race FIA based action we've been getting). Gentlemen, start your engines!