F1 on SPEED!: Abu Dhabi 2012 Would anybody be surprised if I said that the only attraction remaining in this season for me was the US Grand Prix?  No?  Good, now that we've gotten that clear, we've got one race standing between us and Austin, and that's the 2012 Grand Prix of Abu Dhabi.  Here's the track map: 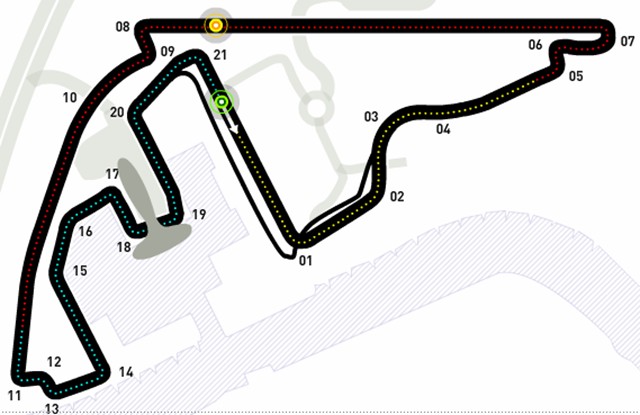 It's undoubtedly a fine place to take a fast car out for a drive.  It's even a good track for series like the Australian V8Supercars.  But for F1?  Over the years, its proven to be too flat, too smooth, too friggin' wide, and as a result, too dull.  Oh look!  Hermann Tilke does it again!  Like many of his circuits, there's absolutely no flow to it.  You're just going from point A to point B, here's a hairpin, go to point C, hairpin, then here's the twiddlybits at the end that prevent anybody from doing anything other than keep the car on track.  But the hotel lights up nice and purty. 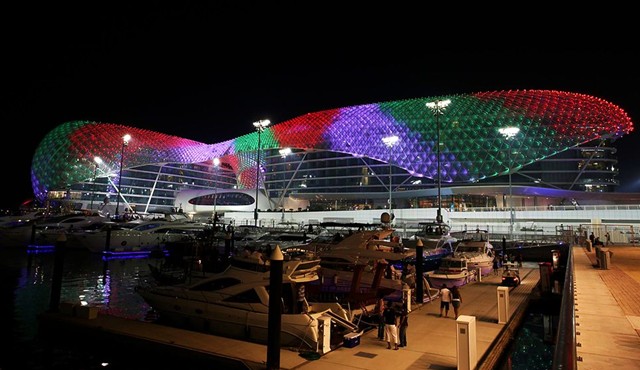 It doesn't have to be this way... even a track built on a pool table can be good: look at Silverstone, with its five feet (maybe) of elevation change.  Or Australia, with its half-foot of height difference between the highest point and lowest.  I don't know why I do this to myself... it's so frustrating.

The circuit itself runs towards the low end of mid-level downforce.  That final sector... the twiddlybits... needs a lot of grip to get a good time, but the rest of the circuit is all high speed and testosterone.  The place is easy on tires, not hard on brakes, and I don't think we've ever seen an engine go kablammo here.  It comes down to who can get in front, because once there, it's difficult to pass.  I see a Vettel victory again, and maybe another pole-to-flag to boot.  God help us.

I can pretty much confirm that SPEED.com has killed off their F1 forums, meaning I no longer have access to the official times of when the streaming occurs... so here's what I've got:
FRIDAY
P2: 8am - 930a Live
SATURDAY
Quals: 8am - 930a vaguely live
SUNDAY
2012 Grand Prix of Abu Dhabi: 630a - 9a live!

If we're lucky, it'll even be right.  F1Update!'ll be here, right along with SPEED's Legendary Announce Team, bringing you all the action(?) as it happens, give or take a few hours.  We'll see ya then!

1 The official F1 website has a handy 'convert to local time' button right on the main page in the countdown section in the right sidebar; I've been using it to set my alarm for practice sessions. P1 @ Friday 0400 your time, P3 @ Saturday 0500 your time.