F1 on SPEED!: Abu Dhabi 2009! And so we come to the end.  The final race of the 2009 season is upon us.  The F1 Circus is packing up its tents for the year.  Unlike the past couple of years, though, there's little to race for at the top of the grid.  The drivers' championship has been clinched and the constructors' championship is decided.  Certainly 2nd place in the DC is up for grabs, with Seb Vettel leading Rubens Barrichello by two points, and the fight between McLaren and Ferrari for third in the constructors title has only a one point difference, but for all intents and purposes the season is over.  In the old days, it wasn't unheard of for a team to skip the final race if they had nothing to gain or lose (Ferrari and Phil Hill in 1961, for example).  Now, however, the teams are contractually obligated to run the whole season.

But there's another reason to run the final race this year, that being the location.  Abu Dhabi's Yas Marina Circuit is a brand new track, one the teams have never turned a wheel on.  So what mysteries will the fresh asphalt reveal?  Let's see what we can figure out with the track map for the 5.5km long circuit: 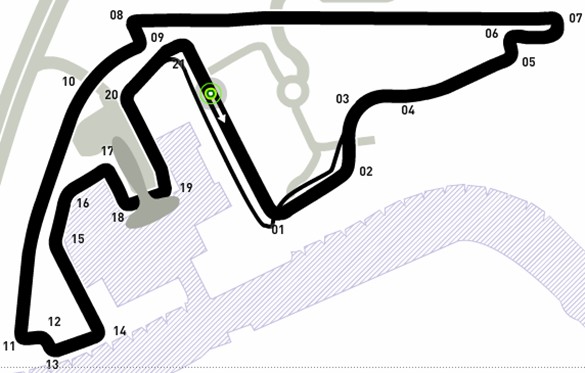 The first thing that leaps out at a casual glance is the long, long back straight from turns 7 to 8.  At 1.2km, it becomes the longest in Formula 1, and after a chicane, is followed by another high-speed stretch.  The next thing one notices is the dual nature of the circuit.  No less a personality than David Coulthard's Chin himself, one of the only F1-experienced drivers ever to run laps on the track, says it feels like both a modern (read 'Hermann Tilke') track and a street circuit.

The GP2 series ran a weekend's worth of test sessions here this past weekend.  This allowed the FIA to get a sense of how the track runs, and the organizers to stage a dry run for the race weekend.  Both groups came away satisfied.  The GP2 drivers praised the layout, complementing the wide turns and the long straights, saying that they should be quite conductive to on-track passing.  They also suggested that it'll be hard on the brakes.

A closer look at the circuit reveals an odd feature of the pit lane.  The exit appears to cross the track at turn 1... and for once, appearances are NOT deceiving.  The pit lane exit actually runs through a tunnel under the track!  Here, take a look:
...and yes, that IS a two-seater F1 car;  I suspect its the former Minardi 2-seater that the team ran as a funds-raiser, but I don't know for sure.  Just pay X amount, and a driver would take you on a couple of laps at speed around the circuit.  In this video, the driver is Bruno Senna, the soon-to-be F1 driver and nephew of the late Ayrton Senna.

I think the pit exit will be only a minor concern only after the first couple of practices and the drivers get used to it.  It is narrow, for sure, but not unduly so.  It'll sure cut down on pit lane speed violations!  I wonder what'll happen the first time someone breaks their suspension in the tunnel... I also wonder what the lighting is like in there.  After all, this is going to be F1's first day/night race, beginning around 5pm local time.  Like Singapore, there's a high-powered lighting system around the circuit, so the drivers probably won't have any difficulties with visibility, but that tunnel makes me nervous.

Bridgestone is bringing their medium and soft compound tires, so they don't appear to be too concerned about the abrasiveness of the circuit.  They are worried about the track surface temperatures, though, and fully expect the tires to blister during the first practices until the teams get used to the layout.

Initial reactions make it look like a medium downforce circuit, at least for this race.  As usual, it's all a trade-off between the high-speed first half and the low-speed second half.  You can't crank on a lot of wing, otherwise you'll compromise the car down those long, long straights, but if you take off too much wing, you'll be hurt from turn 11 thru 21.  I'm going to guess that most teams'll sacrifice top speed... sometimes you've got to go slow to go fast.


Finally, one may notice that, like Brazil, Abu Dhabi runs counter-clockwise.  There's only a few tracks in F1 that are run that way, so there'll be some extra stress on the driver's necks.  It's expected to be warm, but not excessively so, on race day... maybe 90 degrees F.

All in all, Abu Dhabi seems to be an interesting track to end the season with.  As usual, the good folks at SPEED will be bringing us their usual stellar coverage from their high-tech headquarters in Charlotte, NC.  There, the Legendary Announce Team is waited upon hand and foot in their palatial studios... 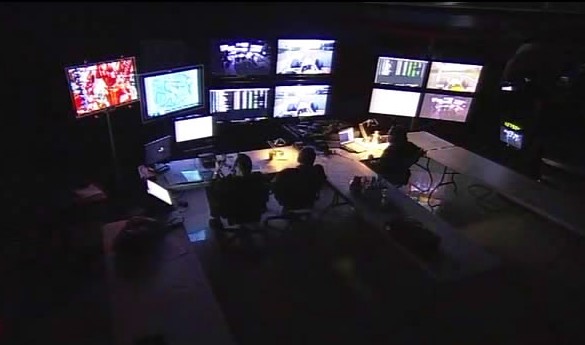 I must admit, I expected something more.  Other than all the TVs, this looks like something you'd find in someone's basement.  Well, no matter, they still do a great job!  Friday's Second Practice comes to us from 8am to 940am, LIVE.  Quals will be from 8am to 930am on Saturday, plausibly live.

We here in the US go back to Standard Time early Sunday morning, so don't forget to set your clocks back an hour!  You'll mess up your recording times otherwise, and with the race coming to us LIVE from 630am to 9am, you'll probably want to set the VCR.  If you mess up, there's a replay from 330pm to 6pm Sunday afternoon, too.

Of course, F1U! will be here with all the usual coverage.  Don't miss it!

Thanks so much for the info about the new track.  The reality show "Amazing Race" did two shows from Abu Dhabi which aired within the last couple of weeks.  One team of contestants got to drive one of the GP-something cars around the track.  Lucky duck.

The location looks beautiful with so much of the city/country brand new.

2 Just from looking at it, my wild guess is that turn 9 will be the best place on the course for passing.

3 Well, perhaps a a continuation of a pass at Turn 8, yes.  The teams seem to be thinking Turns 8, 11, and 1 will be the best passing places, though I have a feeling they're forgetting Turn 7 (the Hairpin).