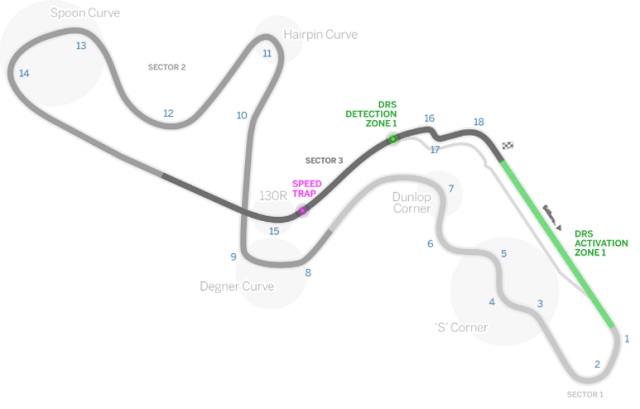 It's my favorite circuit on the F1 calendar.  To me, it's everything you could possibly want from a track.  There is not one single bit of mickeymousing anywhere, even the chicane is pretty handy.  130R used to be the most fearsome turn on the calendar.  Now the drivers are talking about taking it flat-out and pulling maybe six G's in the process.  If that happens, I'll expect to see someone's head popping out of the cockpit like a champagne cork.  The Circuit of the Americas stole their Esses from here, though Suzuka's are tighter.
And oh yeah, there's a FREAKIN' BRIDGE involved.  It's a figure-8 track... next up, F1 comes to the Duckford Speedway for a night of quarter-mile high-banked oval racin'!
Here's the broadcast schedule for the race weekend, brought to you by the Legendary Announce Team and Pocky, the world's favorite chocolate-dipped biscuit stick!
Friday
Practice 2: 1201a - 130a live on NBCSN
Saturday
Quals: 1a - 230a  live on NBCSN
...and...
2017 Grand Prix of Japan: 1130p - 2a Sunday,  live on NBCSN
Again, note that both Quals and the race broadcasts begin on Saturday according to NBCSN.  I'll be along eventually with the F1U!.  See ya then then, shall I?  Yes, let's.

1 Hmm... I actually COULD stay up that late. Don't think I'm going to, though. (The kids don't adjust their sleep schedules to match mine. Ingrates.)

2 As any kid with a slot car set could tell you, having a bridge makes it twice as cool.