F1 on NBCSN: Germany 2016 Germany, ahhh Germany.  Home of... um... German things.  I'll let you make your own jokes.  Me, I'm listening to Rammstein and Kraftwerk and Bowie and if that doesn't make your brain bleed from the awful segues, you're stronger than myself.  Also home to the Hockenheimring, this year's site of the Grand Prix of Germany.  Here's the track map: 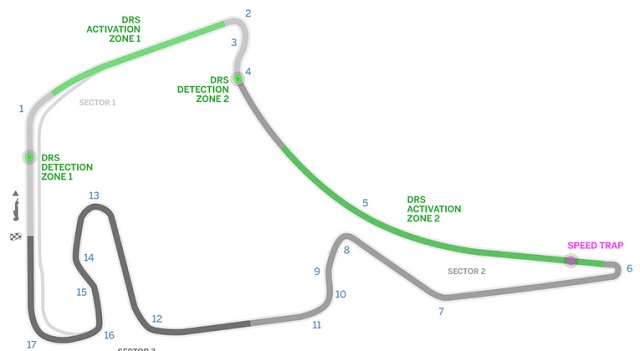 What used to have an epic blast full-speed blast deep into a forest, then turn around and come on back, is now... well, this.  Even Tilke couldn't kill all of a good thing, I 'spose... it's not a horrible circuit, just... truncated.  Pity.

Oof.  I just discovered that the last time F1 raced here was the weekend before I was disposed of by the Bookstore.  How nice for me.  Of course, last year there was no German Grand Prix, undoubtedly out of sympathy... or because Bernie couldn't get the organizers to cough up another couple million Euros, one of the two.

All times Pond Central, so don't make the same mistake hundreds of others have made!  Set your DVR carefully.  If you don't have one, pretend!  F1U! will come along sometime afterwards, and then it will be Summer Vacation for the Circus... yay for them!

1 I recently ran across a video on Youtube (no!) of an F1 parody from Disney's Phineas & Ferb, which had the Top Gear cast doing announcing duties.