F1 on NBCSN: Europe 2016 A week after Canada, the F1 Circus packs up and takes the 16 hour trip to that great hotbed of racing lore and history, Azerbaijan, for the return of the Grand Prix of Europe.  Let's take a look at the new Baku City Circuit track map, shall we?

The first reaction I had when I saw this layout was wow, that's a long front straight,  using "straight" the same way I would at Monaco.  As it turns out, it's even longer than I thought: somewhere around 2.2km.  The whole thing will be just over 6km in length.  "Yeah, but it's still a modern street circuit," you say, "it's going to be miserable."  To be sure, Valencia blew chunks; it was a street circuit in that it ran on city streets, sure, but other than that it was exactly like running on a purpose-built layout.  Singapore is much the same way.  Rest assured, this one isn't going to be like that.  Hermann Tilke, designer, actually paid attention to the architecture of Baku and worked it into the track layout.  Here, here's the first video of a cautious run on the track:

Prepare yourself for the ridiculousness of F1 cars racing at high speed uphill through Turns 8-12 next to a freakin' castle. 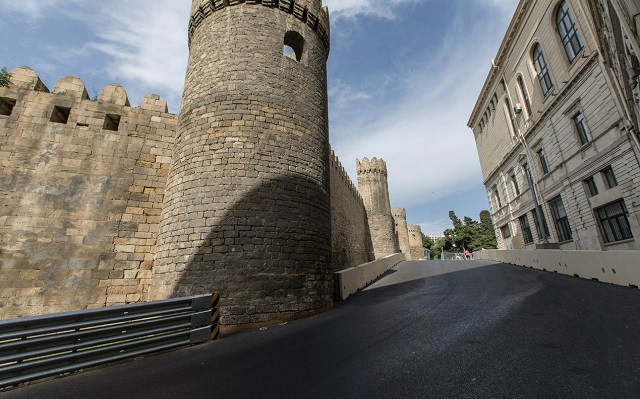 Oh, and you know that narrow portion of the circuit, the straight between Turns 6-7 and Turns 19-20?  Yep, you guessed it: it's the same street, just with a honkin' great divider between the sides.  The sheer spectacle of this circuit will almost be enough to make up for any deficiencies in racing.  Almost. 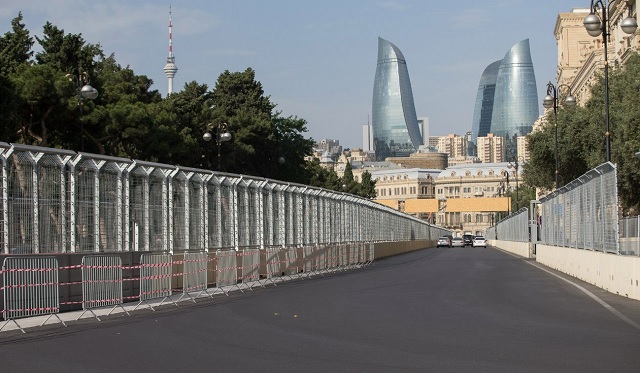 And that's the problem with new circuits. We just don't know what's going to work or not work, and neither do the teams, nor the tire manufacturer.  Pirelli is bringing the Medium, Soft and Supersoft compounds to the race, but we may find that the Medium is overkill... or that the Supersoft won't last a lap.  Or that it's so fast that fuel might be a problem, or brakes will explode or... we just don't know.  Which means we might have a great race... or a disastrous one.  Time will tell.

All times are Pond Central; your mileage may vary.  Of course, F1Update! will cast a gimlet eye upon all proceedings, with a writeup after the race!  See ya then!

Like any street circuit the big problem is fitting in runoff zones, and it looks like the way they're doing it is to allow an out-of-control car to keep going straight at a turn (like #2). I hope they do some painting on the pavement to make clear where the drivers are supposed to turn, or we might see some drivers get confused and simply drive off the course.

Also, it looks like the segment between turns 2 and 3 is really very long. Is that going to be a DRS zone? And will they make the entire stretch between 16 and 1 a DRS zone? (That would be amusing.)

It's a more beautiful city than I would have expected from former USSR. "Brutalism" would be more in character...

2 According to some photographs floating around, the DRS zones will be from (roughly) Turn 20 to the approach to Turn 1, and (again, roughly) the second half of the run from Turn 2 to Turn 3.

From Turn 2 to 3 is just a tiny bit over a kilometer in length, by the way.

The track as seen in the video is quite incomplete... it looked like only the barest minimum of barriers were put up, and practically none of the curbing were in place.  I'm sure that by now, some two weeks later, the track'll be quite obvious to the drivers.

I did a tiny bit of research into Baku while I was working on this post, and there are signs that the city was first established in the 5th Century AD... and despite being a prime target for Hitler during WWII (it's an oil town), the Germans never came close to the city.  As such, it was practically untouched.  Post-War, the Soviets *did* put in a lot of their own special style of buildings.  After the USSR died, though, Baku and Azerbaijan was in good shape financially... so they demolished most of the Soviet architecture.  Much of the "Old City" is a UNESCO-protected world heritage site.  All of that may explain why it still looks as good as it does... plus the modern stuff, of course.

Tilke seems to have made good use of the architecture during his design of the track, like I said... it almost feels Monaco-y in the way it is simply part of the city, as opposed to forcing itself upon the city.

That's all supposition, of course... we won't know until we see video from the track on Friday.  I predict safety cars, though.

3 That entire return trip from 16 to the finish line, there's barely any real cornering at all going on there. Wowza.

I first encountered those in AD&D's "Oriental Adventures", so the knowledge of that word predates my anime habit...