F1 On NBCSN: Bahrain 2013 So.  Here we are again, going into Bahrain for the oh-so-popular Grand Prix of Bahrain.  Here's the track map: 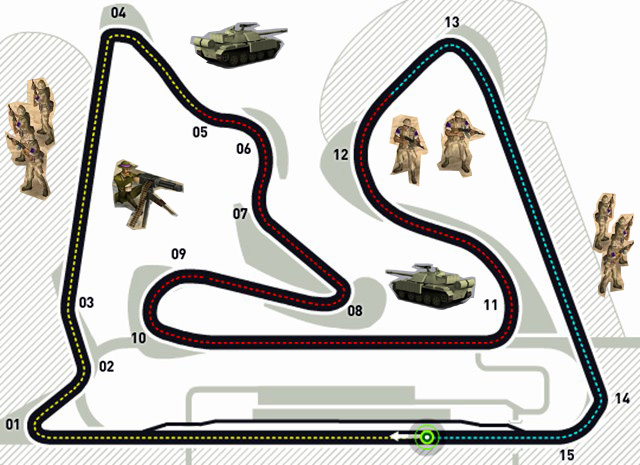 There are still protests occurring on this tiny island country.  Reports are that the Government rounded up dozens of pro-Democracy leaders and imprisoned them last week.  The most intense protests are, unsurprisingly, still centered around our little sport and the intense media circus that follows along.  Also unsurprisingly, F1 Supremo Bernie Ecclestone is clueless: "Whatâ€™s happened? Theyâ€™re demonstrating now? I didnâ€™t know that. Thereâ€™s nobody demonstrating."  The ridiculously loose collective of individuals calling themselves "Anonymous" are saying that they'll be targeting F1 this weekend as well, due to "Mr Ecclestone's blood race."  Last year, they took down the official F1 website on race day.

All of this for a race that, quite honestly, is not very good.  The track is used only rarely each year, it's dusty and sandy, which means it's horribly horribly abrasive as well.  According to Pirelli, it's the circuit that's hardest on tires, due to a combination of grippy asphalt and gritty sand.  I've often joked of circuits being made of "sandpaper and razor blades", but it appears that Bahrain really is.

We're not likely to experience much in the way of weather.  There's always the chance of a sandstorm, but rain is almost certainly not going to happen.  Building your track out in the middle of a desert provides you with one benefit over circuits like, say, Singapore: you've got a LOT of run-off room.  It's probably the safest circuit on the calendar that way.  Never mind the rioters.

As with the past few years, though we here at F1Update! don't think that F1 should be racing in Bahrain, since they are, we'll be covering the race.  The past two have been dominated by Seb Vettel... let's hope for something different this year.  See ya then!