F1 on NBCSN: Austria 2014 We're slightly giddy around Pond Central today.  Not only did we survive the store visit last Friday, not only did we get a surprise rubber duckie in the post this weekend (more to come about that!), but we've got a brand new race track to enjoy when the F1 Circus makes its way to Spielberg Austria, home of the RedBullRing!  Let's take a look at this n00b: 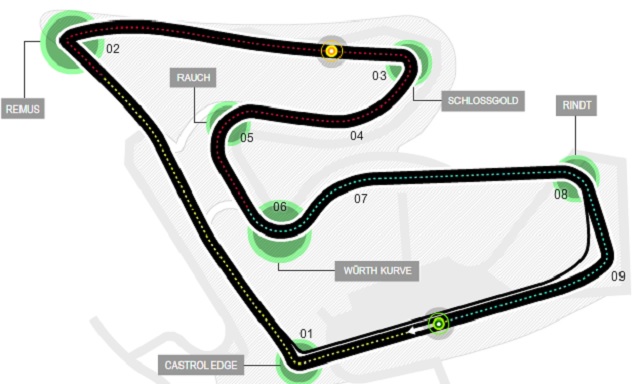 One thing we can say for sure: it isn't a Tilkedrome! (Though it was the first circuit he redesigned for F1, as it turns out... read on!)  Nor is it really a new circuit, either, as F1 used to race here; most recently from 1997 to 2003, when it was known as the A1-Ring  It was purchased by the team sponsor in 2004, renovated, brought up to F1 standards, and slotted into the calendar when the Grand Prix of Weehawken was postponed (again).  So here we are.  What sort of circuit is it?  It's short, fast, with a pleasant amount of elevation change, but best of all... it flows nicely.  None of this start-stop-start-stop crap we're "treated" to at all the new circuits, oh no.  Actually, here's a (loud) video to give you an idea...

Speaking of Herr Schumacher, there is news.  He was moved today from ICU to a rehab hospital, while his spokesman proclaimed that he's no longer in a coma.  Certainly good news, except it's nothing new: he's been out of the coma since some time in April, when it was reported that he was opening his eyes and having some minor interactions with the world.  That's called "being out of coma."  So today's news... isn't really news at all, except for the being moved to a different hospital bit.  So on one hand, yay, but on the other?  He's still not likely to be able to feed himself, or possibly even breathe for himself, for a very long time to come, if ever.  The weird thing about the brain is that a ridiculously fit man like Slappy may not have a brain that can "rewire" itself around the damage inflicted, while a 46-year old sedentary man who writes about F1, has never driven a manual car in his life, and has only once driven about 100mph, might have a brain eminently suited to rewire itself.  We just don't know until it happens.  If it does.  What I'm saying is, Good Luck, Michael.  You were far from my favorite driver, but I'm pullin' for you now.

Of course, the good folks of F1U! will be gathered for their usual hijinks, so why not join us?  So there, hah!

1 Oooh, that does look like a neat track. Looking forward to the race results!

2 It's not marked on your map, but it looks like the 2->3 straight and 9->1 straight are DRS zones.  I wonder if it's going to have the same brake system stress that Canada does.

3 It looks like a very fast track, and I'm pleased that they didn't toss in a gratuitous chicane or two just to slow everyone down.