F1 on NBCSN: Australia 2016 And we're off!  The 2016 Formula 1 season is just a few days away.  As is traditional, the Circus is Down Under, raising its tents for the first race of the year.  There's a new performer added to the show, and two major rule changes, so this'll be fun and exciting in ways we've not seen in a while!  But first, let's look at the track map for the 2016 Australian Grand Prix: 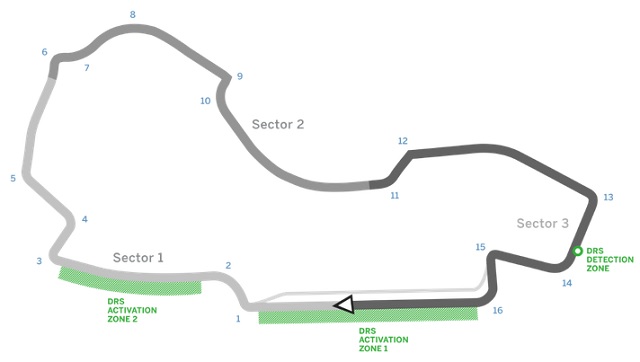 To me, the track in Melbourne is almost like a security blanket.  It's always been there, it's never changed, and it's just a swell place to have a race.  Fast, but not fast fast.  Twisty turns, but not ridiculously so.  Tough, but fair.  A great way to start the season, both for the fans and for the teams. The only bad thing about it is that it takes place at Inconvenient O'Clock, Pond Central Time, but at least Quals and the race bookend Saturday!  Here's the broadcast schedule, brought to you by the Legendary Announce Team, NBCSN, and F1Update!: ask for it by name!

Which brings us to the first bullet point of the season.  There's a new team on the grid, and it's American. 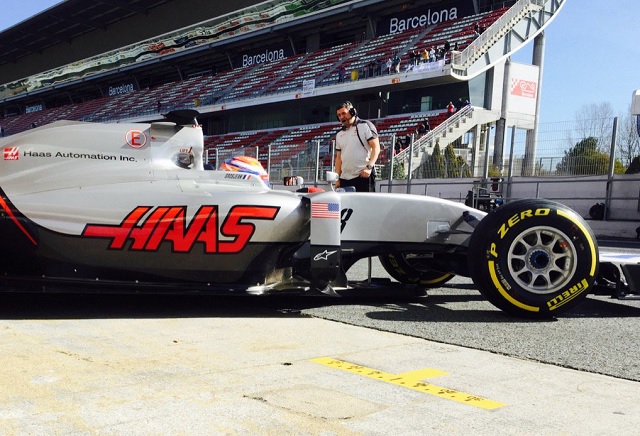 Now Haas F1 is American the same way McLaren is British, or Renault is French... that is to say, "nominally."  Every team on the grid is made up of people from around the world.  Team Principal Guenther Steiner is Italian (name sure sounds German, though), the drivers are French and Mexican, and they've got bases of operations in England and North Carolina.  But it's got the American flag on it, Gene Haas (the founder) is American, and that's all that matters.  I'll be paying special attention to HaasF1 all season, and we'll be having a good ol' time with the good ol' boys from Kannapolis.  They've already been impressive in pre-season testing; despite losing a front wing on the first day, and an entire day in second testing due to engine problems, they still turned more laps than McLaren and showed good pace the whole way.  Promising, if nothing you can really hang your helmet on.  Moving on... 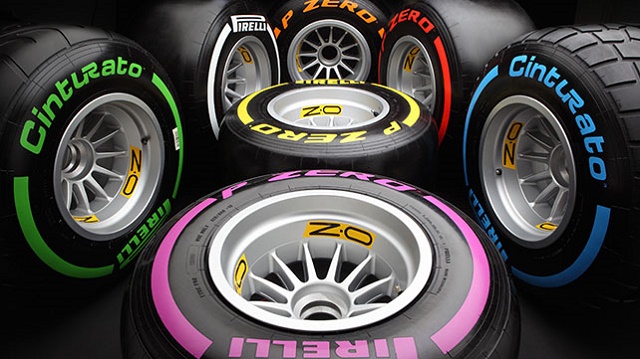 There's been a couple of changes to the tire rules for the 2016 season.  The first, and easiest to explain, is the addition of the Ultra-Soft tire compound to the old standbys of Hard, Medium, Soft and Super-Soft.  Back when Pirelli was last providing tires to F1, qualifying was single-car-single-lap, go as fast as possible and damn the torpedoes.  To get the maximum amount of speed, teams had qualifying engines, tuned to (reportedly) give as much as 1500hp at some circuits... at the price of being useless after only a few laps.  Think of them as F1's version of a Top Fuel dragster's motor: one run, then a complete rebuild.  However, those engines would be useless if you couldn't apply the power to the circuit, and thus was born the Qualifying Tire.  If the qualifying engine had a short life, the Quals Tire had one equally as short, if not worse.  Imagine marshmallows covered with velcro and slathered with superglue... lots and lots of grip, but no lifespan to speak of: one race lap was about it.  The new Ultra-Soft tires aren't quite that bad, but only maybe by a few laps before they're scattered to the four winds.

The difficult rule change is how tires are allocated during the weekend.  Before, Pirelli would bring two compounds to the track, and all teams had to use at least one of each during the race.  The rules now state that Pirelli will announce three compounds for each race, and the teams get to choose how many of each compound they want (up to a maximum of 13 sets).  The only catch is that the softest compound must be used during Q3 of Qualifying, and the drivers must have at least one set of the others for the race.  If I'm reading the rules correctly, the drivers don't actually have to use both, just have them available.  Oh, and they have to give back the softest tires before raceday.  I think.  For Australia, the compounds are Medium, Soft, and Super-Soft.  If I've got these rules incorrect, please someone correct me, because they really are a bit vague. 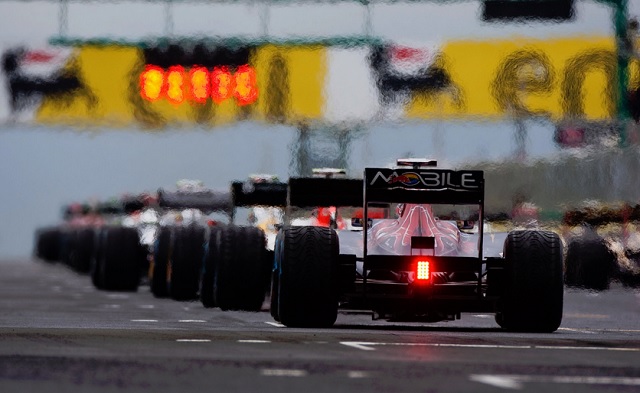 Finally, there's a new Qualifying format.  On the surface, it's quite similar... three Quals periods, knockout elimination, you know the drill.  Except now, Q1 is 16 minutes long, and instead of removing the slowest five all at once, after seven minutes the slowest car will be eliminated, followed every 90 seconds by the slowest car remaining until the session is over.  Thus, seven will be knocked out, and 15 go on to Q2.  Q2 is 15 minutes long, and after six minutes the slowest car is removed, then every 90 seconds thereafter.  That will leave eight cars for the final session.  Q3 will be 14 minutes in duration, and after five minutes the slowest is knocked out.  Again, another car will follow every 90 seconds until there are just two remaining.  Those two will then go until time's up.  Simple, right?  I think the FIA is a little over their skis on this one... it might really be cool, but I have this feeling it's needlessly complex and will be hard to keep track of for the fans.

Well, we'll find out this weekend!  Keep an eye out for the first F1Update! of the season on Sunday!

1 I'm not even going to attempt making sense of the tires thing, but I'm wondering: Why, do you suppose, did they fiddle with Quals? Does it improve something for the teams in general, for a particular heavyweight team, or for the viewing audience?

2 I'll make a stab at that - they've got long quals sessions, but the extra length wasn't being used by the teams. If you had a car that you'd expect to get to Q3, you did one hot lap in Q1 and then put it in the garage, unless the team wanted some kind of testing. You might not even do two hot laps in Q2. Now, you've got to get your car onto the track at the beginning of each session, lest you be the first one knocked out and have to start behind the back-markers.

On top of that, it might be a bit more successful in generating drama. Previously you'd have a whole pack kicked out at the end of each session, but especially in Q1 you pretty much knew who was going to be in that pack, and there wasn't any real drama about where they were within that pack exactly. Now you've got a reason for the announcers to pay attention to the guy in 21st - can he put a good lap together in time to pull ahead of the guy in 20th? Hopefully this will be more interesting than shots of an empty track and the announcers saying "everyone's waiting for the last five minutes of the session to set a time."

(On that note, the added drama for the back-markers ought to be good for them - screen time equals happier sponsors!)

4 I agree with Avatar re: the quals format and why they changed it, and I also agree with FDM about the tire rules.

Now, you've got to get your car onto the track at the beginning of each session, lest you be the first one knocked out and have to start behind the back-markers.

Avatar, I don't see how the new rules change that. If a fast team (say, the way Mercedes was this year) gets out early in Q1 and establishes a really fast hot lap, why would they need to stay on the course? They won't be on the bubble; they've already established themselves as being faster than anyone else.

If they misjudge and are within three or four of the bottom, they can always send their car out again for another attempt at a faster hot lap. But if they have already set a time that few others can reach, there's no incentive for them to be on the track for the rest of that qual session. It's exactly the way it was this year.

That's an advantage for every team, not just the fast ones. With fewer cars on the circuit it's easier to set a better fast lap because there aren't many cars getting in the way. Not an advantage for the network, of course, but it's better for the teams. (Also reduces wear and tear on the cars.)

6 So it might be a simple case of "we pay these people to think up rules changes, they've gotta earn their keep somehow." Gotcha. *wry grin*

7 Actually, that's an interesting question. If you've got 2 or more cars with no time at the first elimination point, who gets the boot?

9 Now, of course there is such a thing as Success Ballast.  Both DTM and BTCC have rules that, if you win a race, you have extra weight added to your car for the next race... if you win THAT race, you have more weight added, and so on and so forth, up to (I think) 45kg.  It's been a while since I looked into the rules, so they may have changed somewhat so don't ding me if I've got specifics wrong.

Success ballast works really well in touring cars and GT-style cars, but while I understand the desire to do it in F1, I'd probably be against it.

11 I'm tired and had a funeral to attend today, so maybe I'm missing something perfectly obvious, but; regarding success ballast:  why would you do that?  What does it accomplish or prove?

12 Well Ben, it does make the racing closer, since the cars/drivers who might otherwise pull away will be slowed by it.  The few BTCC races I watch usually feature some good wheel-to-wheel action.  But it's horribly artificial and kind of undermines the idea that racing is a proper sport where the best competitor wins.

13 "Success ballast" sounds like the reverse of the mechanic in Mario Kart, where drivers at the back of the pack get a speed boost.  That's fine in a video game, which is ostensibly about group fun.  Doesn't seem so great for a race where lots of money is at stake.

14 So the point is to artificially make the racing closer, and therefore "more exciting".  Which is the governing principle of NASCAR, as well.  I do agree that close racing is better, but knowing it's a construct bugs me a bit.