F1 on CNBC: Great Britain 2017! If Monaco is the heart of Formula 1, and Monza the throbbing adrenal glands, and Hungary whatever earwax is, this weekend's track is the very soul of the sport.  It was here that the F1 championship was born, most of the teams are located within a short drive from the circuit (and one literally across the street from the front gates), and it's been the home track for many of the greatest names in the sport's history.  Thus it should come as no surprise to veteran watchers of F1 or readers of The Pond that there's a very good chance indeed that next year will be the last British Grand Prix to be held at Silverstone for a while.  Here's the track map: 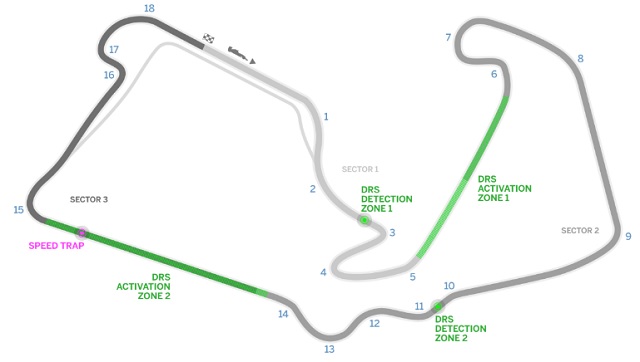 The British Racing Drivers' Club, the owning body of Silverstone, activated an escape clause in their current contract with Formula One Management... or Liberty Media, whatever the powers that be in F1 are now...citing ruinous fees to host the event.  They say they've lost £7million over the last two years, and expect to be another four million in the hole this year.  So suddenly we no longer have a track for the British Grand Prix.  The BRDC will, of course, immediately begin renegotiating with The Powers That Be, going for lower fees, and who can blame them?  By the end of the contract they just got out of, 2026, they would be paying £25million just to host a F1 race... never mind upkeep, improvements, so on and so forth.
Which makes what happened today in London so interesting.  See, F1 put on a little show in the heart of the city, meaning we got the spectacle of modern and classic F1 cars prancing around Trafalgar Square.  It may not be coincidence that there's a serious push for a race in London. Gotta admit, that'd be really freakin' cool.
19 of the current drivers appeared at the event, the lone no-show being Brit Lewis Hamilton.  Gotta say, that's awfully stupid of him, but hell, it's not like I'm a fan anyway.
One thing we know for sure: the Legendary Announce Team will be doing their usual stalwart coverage... hopefully David Hobbs will have recovered from the bug that bit him.  Here's the times:
Friday
Practice 2: somewhere between hither and yon.
Saturday
Quals: 7a - 830a, live on CNBC
Sunday
2017 Grand Prix of Britain: 630a - 9a, live on CNBC
All times Pond Central.  Accept no substitutes!
F1U! will be along sometime thereafter... see ya then!

1 And Formula 1 Management, eager for publicity, has blocked the video.

2 (Blocked from Embedding that is.)

3 Pity, it worked through Friday at least...