F1 China Practice 3: Liveblogging! (PRE-SESSION) Okay, this time for sure!  It looks like we'll have a Bahrain GP this year, more's the pity.  Money trumps human decency, I guess.  *shakes head*  Enough politics, lets get to the racin'.  Or the practicin', as the case may be.

F1Fanatic has a good roundup of reactions to the announcement regarding the Bahrain GP.  It's not pretty.  They're burning Bernie in effigy.  Which just means they're like most F1 fans around the world.

(58:20) I wonder if the teams think we'll be getting rain soon, however.  Nearly the entire field hit the track within the first 90 seconds.  They usually straggle out; if there's rain coming, they'd go out to get some dry laps under their belt.  Who knows?

(56:31) Oh.  Installation laps only.  I should have known.  Seriously, if someone with talent would rather do this, let me know. 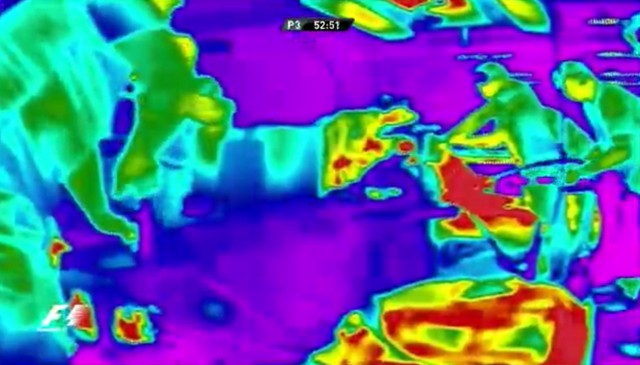 Thermal camera shot... that's the front-left tire in the lower right corner, and that big red blob above it is the engine.  Always interesting to see.

(45:03) Or not.  Two minutes of crowd shots, paddock look-ins, and one brief moment of a patch of grass.  All of which are, apparently, more interesting than a HRT to the FIA producers.

(41:24) My feed seems to be crepe tonight.  I'll go a minute, then the video pauses, then it continues on like nothing happened.  Weird.

(39:40)  THERE we go!  HRT in the runoff area, and nearly to the kittylitter.  It's now an official practice session.

(37:55)  While it's not raining, the thin sunlight the track is getting isn't doing much in the way of heating of the tarmac.  Nico Rosberg was just crying about having both under- and over-steer, sometimes in the same corner.  The team came back with "the track is cold, deal with it."

(35:15) Vettel is having brake problems.  He went into a corner, applied the brakes, and the clampers on the front-right corner didn't release until he was all the way through.  That's not good at all.  His radio call was not amused.

(33:27)  Lots of people standing around, staring at the offending wheel.  Not so much working going on, however.

(30:00) Half the session gone.  HWMNBN has made an appearance, positioning himself in 10th.  the bells in Maranello are silent.

(28:44) Oooh, Mr Director, I love it when you cut from one McLaren T-bar camera to the other like that... it feels so art-schooly!

(27:03)  HWMNBN jumps up to 8th on the timecharts.  Somewhere, Enzo Ferrari is whirling dervishly in his grave.

(24:44)  Good: Kimi Raikkonen is in 4th.  Bad: Over a second behind the fastest lap.  Ugly: looks like he has a sparkler dragging under his car.  Might have to raise that ride-height, lads.

(23:01) Oooh, Mr Director, I love it when you slow us a super-slo-mo replay of Lettuce Grosjean having a spin... it looks so film-schoolish!

(20:56) Nico Hulkenberg just pegged the meter at 4.8G at the end of the back straight.  From what I've read, that'd be awfully uncomfortable.  Now do it multiple times a lap, over 50-odd laps or so.  We'll pick up your head after it falls off, trust us.

(13:13) There are now only two cars on track, Webber and Button.  Mr Director is showing us neither of them.

(12:45) Red hot mechanic action.  THRILL to the sight of a Renault Lotus mechanic trying to remove a brake housing!  With a hammer, it looks like.

(9:09) Button is now #1 on the timesheets.  Meanwhile, the wind howls outside my balcony.

(7:50) Oh look, it's Felipe Massa in his last practice session before he's canned from Ferrari!  No pressure, Felipe!

(7:04) Radio call to Slappy Schumacher: "We're looking for consistent fast laps.  No slow laps, no slow laps."  THAT'S what HRT has been doing wrong all this time, they're supposed to be doing FAST laps!  It seems so obvious in hindsight! 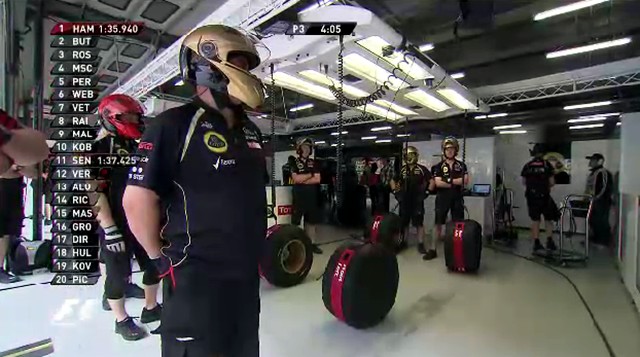 (SESSION OVER) Hamilton, Button, Rosberg, Schumacher are 1-4 on the session's timesheets.  Four Mercedes-powered cars in a row.  Oof... not looking good for the rest of the field, is it?  Fortunately for everybody else, Hamilton has that 5 grid-spot penalty coming for changing his gearbox.

Quals sometime tomorrow afternoon!  See ya then (unless I get up really early to go to work)!

2 An "installation lap" is basically a way of saying "yes, we have a car, it ran on track, we participated in the session." and also "hey look, the mechanics did everything right, nothing fell off.  Now you can think about pressing on the loud pedal for real."

3 It's when the teams send the car out to make sure everything still works, or any repairs/modifications/whatever hold together.  It's giving the car a thorough shakedown, basically.