Extending Apologies To The Spookliy-Named Group
Well, Ghost is much too weird for me to explain them.
That's what I said in the blurb for the Pet Shop Boys' cover in the last post.  I'd like to apologize for that, because some few hours has taught me quite a lot about the band from Sweden.  You would do well to turn the volume up on this post, by the way.

Everybody knows what a concept album is, right?  A bunch of songs devoted to the same thing telling a story as they go... The Who's Tommy, Pink Floyd's The Wall, Joe Jackson's Big World, Alan Parson's Project's Tales of Mystery and Imagination,  Styx's Paradise Theatre, all examples of the concept album.  Well, Ghost takes it one farther: they're a concept band!  The concept is, however, that they're a Satanic cult led by their charismatic frontman.  Said frontman has until only lately been appearing in skull makeup and church regalia.  These days, he wears a Uncanny Valley facemask.

Didn't make the satanism rumors go away, which is probably exactly what Ghost wants.  The more I think about it, the more I believe them to be more performance art than musical band... though considering their formidable skills, I'd not say that to their faces.  These Followers of the Morning Star can friggin' rock. 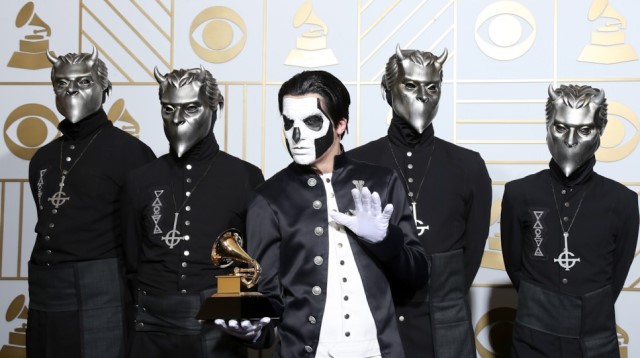 Yes, that's right, that's a Grammy Award they've got there.  They won the 2016 award for Best Metal Performance for their song Cirice.
Nowadays the Grammys aren't worth much of a much, but for people of a certain age... ahem...  that remember what they used to be, there's still a cachet to owning one.  And while that's a helluva music video they've got there, Ghost seems to be a better live act.  Here's a live version of Cirice, for example.

Across the board the band's official videos are... inventive.  To the point that sometimes they take away from the actual music... the video for Rats! is so goofballish that the song (which isn't one of their best, it must be said) just gets swamped.  At other times, the video will actually explain the song (see Cirice, for example).  Often enough, fortunately, the band'll leave things open to interpretation, forcing you to actually listen.  Square Hammer appears to be freemasonry, clever since how many people actually KNOW what a Mason is/was anymore?

In a lot of ways, there's nothing new with Ghost.  They're absolutely metal, taking cues from all over the map: Kiss and Metallica are references mentioned in interviews (and there's a kickass cover of Enter Sandman played in front of the King of Sweden, too... turns out Hetfield's a fan!).  They don't seem to be just the usual headbanging heavy riffers... there's a serious amount of songwriting and musical talent here.  I'm tempted to say that this is "Metal For The Thinking Man", except they'd probably make fun of me for being pretentious.  But come on, read the lyrics to what I think is their best song, He Is:

If you didn't know better, this is Christian Rock.  At least, it is to start.  It sort of heads south (if you know what I mean) along the way to the end.  Even then though, you really have to be thinking about what the lyrics are saying to catch it.  The reference to the story of the burning bush speaking to Moses is really sneaky... when Moses asks for proof that he's truly speaking to God, the reply is "I am who I am."  So "he is" is second... or is it third?... person referencing here.  Circles within circles.
I find online reaction videos to Ghost to be hilarious.  Either people love them, or they're confused as hell... that reaction is usually from self-described christians.  These guys love the song, but despise the message, except then they don't like the song, but they do, and... and... and... they're right though, Mere Christianity is a wonderful book.

Go out, give 'em a listen, you might be surprised.  Or you might hate them.  Either response is perfectly valid, and I'd understand either one.  Or don't think about it and just bang your head vigorously.  That works too.

1 Not bad, but I prefer Powerwolf.

2 I've been listening to them ever since you shared the other day. Purchases will be coming soon.