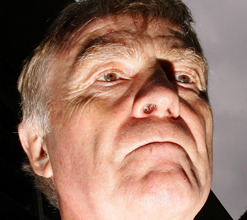 Ve hav VAYS uf makink you cheer ver Ferrari...
According to a story in The Australian, Max Mosley, the grand-high vizier of the FIA, is embroiled in a sex scandal and is under pressure to resign from his position.

When asked about the allegations, Bernie Ecclestone, F1's commissar-in-chief and long-time friend of Mosley, said  “Assuming it’s all true, what people do privately is up to them. I don’t honestly believe (it) affects the sport in any way. Knowing Max it might be all a bit of a joke. You know, it’s one of those things where he’s sort of taking the p*ss, rather than anything against Jewish people.”

Sir Stirling Moss, the former champion driver who's father was Jewish, said "I don’t see how he can continue. I hope he can, frankly, because I think he’s very good at what he does. I suppose what goes on behind closed doors is his business but when a thing comes out like this . . . it’s an absolute shocker.”

I think maybe he should pay a fine... say, $100 million?  Surely there's more proof involved than that brought against McLaren last year.

Mosley is pursuing legal action against The News Of The World, the tabloid that either took or acquired the videotape in question.

UPDATE: The creepy News Of The World article is located HERE.  Yeesh.

1 Video at News Of The World: http://www.youtube.com/watch?v=y6X8BrcYCQA. Not safe for anybody.