Ducks In Anime: Apply Directly To The Forehead 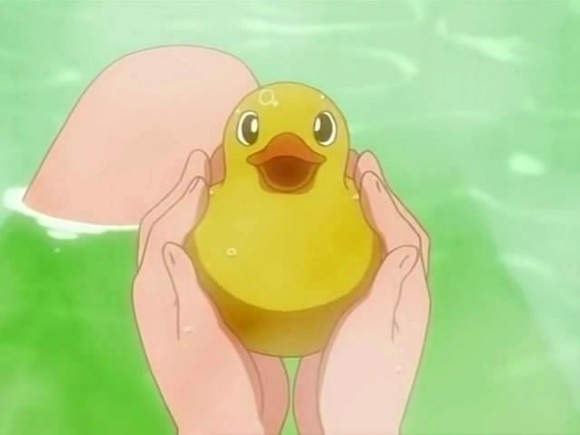 If there was a Hall of Fame for anime with ducks in them, Hidamari Sketch would be Babe Ruth.  Practically every episode has this duckie in it at one point or another!

Which, if you stop and think about it, is about as good a recommendation for a show as any other.  Most shows would be improved by the addition of rubber duckies to the lineup of characters.  Shinji wouldn't be so friggin' angsty if he had one in Evangelion, for example.  No more sad girls in snow in Kanon if Ayu had a rubber duckie or two.  Everything that happens in Elfen Lied would have been avoided if the agency had though about giving the diclonuses (diclonii?) rubber duckies!  Dokuro-chan would have been watchable with rubber duckies!

Okay, maybe not that last one.

1 Maybe your DVD drive is pining for its own rubber duckie?

2 There are five rubber duckies on Chiyo-chan (as well as three figures from Onegai Twins), so that's probably not it.