Doctor Who: I Might Regret This Now that Matt Smith's four year run as The Doctor has come to an end, I'm going to do something bonecrushingly stupid... I'm going to state a preference for one recent Doctor over another. 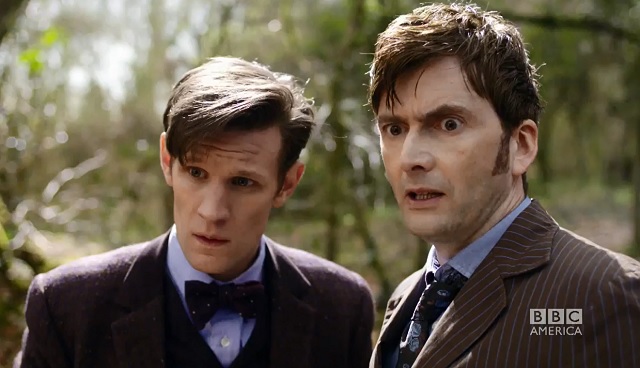 To whit: I think Matt Smith was a more successful Doctor than David Tennant.  This is not to say that Tennant wasn't good in the role; he clearly was.  After the disastrous run of Christopher Eccleston's PTSD Doctor1, Tennant could have sunk the franchise completely.  He didn't, however, and without his years as the time-traveler, Doctor Who would not... could not... be as huge as it currently is.

In a broad sense, the success of Tennant's run is based on amazing episodes.  Take away "Waters of Mars," the Christmas specials (particularly 2007's "Voyage of the Damned", aka "the one with Kylie Minogue"), "Silence in the Library" (aka "the first one with River Song"), the wonderful "School Reunion", and my favorite of the bunch "The Girl in the Fireplace", and some others that I can't be bothered to look up right now, and you've got a rather lackluster overall picture.

Smith, Tennant's successor in the role of the Last Time Lord, brought more energy and humor to The Doctor.  His success is undoubtedly based on the entire run of episodes, as opposed to individual ones.  That's not to say there weren't excellent episodes; there surely were.  "Vincent and The Doctor," "The Doctor's Wife", and "Asylum of the Daleks" immediately come to mind.  However, Smith's Doctor is almost a throwback to the original serial version of Doctor Who.  While each episode is a standalone or half of a two-part, they all fit into the overarching storyline for the season, whatever that might be.

In any case, I believe that if you choose an episode at random of Doctor 10, and one at random of 11, you are more likely to see a very good one with #11.

Smith also had the better "supporting cast" with him as well.  Amy & Rory were his companions for two-and-a-half seasons, and while they probably should have moved on earlier than that, they were clearly superior to anything Tennant had with him... though Rose was no slouch.  It may be personal bias that believes that makes me think that Clara will be better than either A&R or Rose.

So, yes, I find that Matt Smith is the best of the recent Doctors, and probably ranks just below Tom Baker in my mind in the Great List of Doctors.  The comment area is below... let the Flame War commence!

1 Crap, I lost my comment. I hope this does not become a bad duplicate.

I stopped watching in my teens after Pertwee, Baker and Davison (the All Creatures guy). I was alerted to the renewed series with Eccelston and I loved it from the get go. I think that the writers, Moffat and Davies in particular, deserve a lot of the credit. At least as much as the actors. The stories were so interesting, the ones that had long arcs were so well conceived that it really pulled me back in.

Tennant was the better actor, but Smith was physically more how I expected the Doctor to act. Doing the "about faces" that Tennant could execute, both verbally and character-wise is a hard thing to pull off for an actor and he did a great job with it. Smith had body movements that would be unbelievable if the character was not established beforehand. He pulled that off.

I guess I don't have a favorite, but I will say that, with every regeneration, I fretted how the new guy would top the old guy, and usually by the second episode I was hooked. That is every bit the writer's doing as the actors. Each script considered the new personality, and the personality of the actor himself. It takes talent to do that.

Last, you mentioned characters. I think that Amy and Rory would have worked well for either Tennant or Smith, but I am not sure that Martha or Donna wouold work with Smith. Certainly not as good as with Tennant.

2 IDK, Smith left me cold.  I thought Tennant was pretty good, tho no one has managed to top Tom Baker.

The thing that really made me stop watching the show is how BBCA was scheduling the damned thing.  I could never figure out when it was on or what episode was showing, and when I did manage to find it, it was a rerun.  This was about the time it switched from Tennant to Smith, so it's been a while since I bothered with the series.

Obligatory old fan/ hipster line:  "I liked Doctor Who before it was cool!"

3 Doctor Who was always cool.

I'm still trying to work out whether the whole of Matt Smith's tenure constitutes a single stable time loop.

4 I have a lot of respect for Smith and Tennant and Eccleston as actors, but the show and the actors are consistently directed as though the whole thing were a panto instead of a TV show. It's a constant assault on one's suspension of disbelief, as is the whole bizarre aggrandizement of the Doctor by the writers, coupled with their obvious extreme difficulty in portraying him as genuinely virtuous and wise instead of a tin-plated dictator, with delusions of godhood supported solely by script control.

There are some good bits, but they're not really enough to keep me watching. I'm glad other people manage to enjoy the new show, but personally, I think I've gotten a lot more solid enjoyment, and suspension of disbelief, out of Joseon X-Files, Vampire Prosecutor,  or Young Justice Bao. So yeah, clearly what we need is a South Korean drama version of Doctor Who.

5 Personally, I liked Tennant best mainly because I couldn't stand to look at the tall gangly Mr. Chin. BUT, they were both very good for the very different Doctors they portrayed. (And Smith did grow on me, a little).

Each Doctor gets companions that are suited for them because, well, they're written that way. And in general, I think the writing improved once Davies went away (and his compulsion to make everyone gay.) Although Moffat is a little too horror oriented for my tastes.

This also seems like a good place to drop this little gift I previously put on twitter:

"The Doctor is very sensitive.  The Time War made him Hurt."

6 Oh, and as for catching the show, I use eztv to catch the torrents.

7 Moffat is a little too horror oriented for my tastes.

So his writing is too much like... Doctor Who  for your tastes?

8 There's horror and then there's horror.  I mean, clearly you wouldn't want to do a Doctor Who take on Jack the Ripper that featured pieces of organ flying around. You might do invisible serial killing time travelers or flying knife aliens invading, but having middle-aged ladies of easy virtue with their guts and other parts spread everywhere? No. So no splatter horror. No rapists of adults or children.

Similarly, the traditional Doctor Who horror was geared at scaring the daylights out of children and being creepy for adults -- but not being so bad as to traumatize children or adults. You didn't know whether it would be something utterly strange and fantastic, or something close to home.

But there also needs to be something for those members of the audience who aren't scared, so that they will not become bored. Horror can't be the only dramatic value in a Doctor Who ep ever, because it gets boring to be under constant suspense (or just not to be scared). The whole scary clown thing is always a mistake, because plenty of people will be staring at the screen incredulously or laughing helplessly at the whole concept of scary clowns. (Yeah, Sylvester McCoy seasons, I'm looking at you.)

9 I don't watch Doctor Who, but is that still from a zombie episode or something?  The pallor, the sunken eyes, the pronounced orbital bones... they look like extras from Day of the Dead  or Night of the Comet.