Dental Obnoxiousness Pt II As you may remember, last Friday I had a tooth pulled.  It went rather smoothly, to be honest.  He wasn't even finished saying "Okay, here we go" before the tooth was out of my jaw.  It was like all it needed was a little tug and voila!  All done!  Didn't even bleed all that much, or for very long.  Looking back at it, I should have realized that just meant things would go wrong eventually.

The past few days, the location of the former tooth has been kinda tender, and it ached a bit after eating.  "Well, yeah," I hear you saying, "you just had a tooth ripped out of your jaw, it's no wonder it was tender and sore."  And I completely agree with you.  At worst, I'd take a tylenol and the slight burning ache would go away.  Something nagged at me, though; when I had a tooth pulled in the past, I don't remember my mouth hurting at all five days afterwards.  So I called the oral surgeon that did the yanking, told his nurse what was going on, and she said c'mon in!  Their office is just a few minutes away from the Duck U Bookstore, so that wasn't a problem.  I told my boss that I'd be gone for a half-hour or so, and all would be right with the world.  What could possibly go wrong?

I sat in the dentist chair, and the first thing he did after I told him that the area was tender... was to poke it.  "Did that hurt?"  Yes, all things considered.  I hope you weren't surprised by that answer, Doc, since I just told you that it was tender.  "Well, let me rinse the site out with sailine solution." 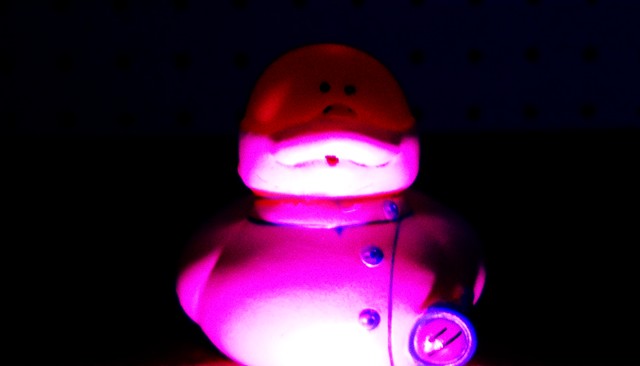 "...and then I'll stab it with a red hot poker covered with battery acid and shards of razor blades!"

After they scraped me off the ceiling, Doc gave me the good news: DRY SOCKET!  For those who don't know, dry socket is an event where the blood clot that forms after an extraction... fails or never forms at all.  In essence, you've got a hole in your mouth that goes right down to the jawbone.  Usually this is a ridiculously painful thing, though in my case it wasn't bad at all.  Or maybe it was; I've always had a high tolerance for pain.  Heck, I passed 13 kidneystones in one year, including two while I was at work, and not only did I not go home, but I sold five Preferred Reeders cards while I was doing the passing.  I'm no stranger to pain is what I'm saying, but I know I've been a bit grumpy this week.  Easily annoyed, too: did you color in the little graph paper squares on your rental book sticker?  Grrrrrrr.  Don't know what your class number is?  GRRRRRRRR!  Talking on your cellphone while I'm trying to tell you how much your textbook is worth?  You'd best believe you're going to die very very soon, probably when I shove that textbook into someplace sensitive... like your spleen.  So maybe the dry socket pain has been working its magic on me.  Fortunately, there's a solution for dry socket pain; a mixture of analgesics, zinc oxide and oil of cloves.  Takes the ouchies right away... except it has to go in the socket, right up against the exposed bone.  The nurse handed me a few kleenex (wha?), and as I reclined in the chair, I wondered just exactly what the kleenex were for.  Then the doc tried to apply the oil-of-clove-saturated packing material to the socket. 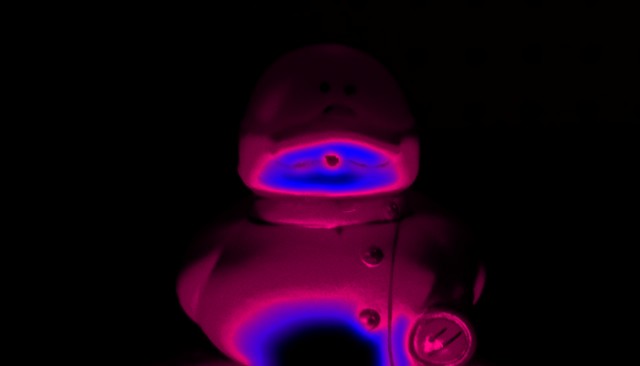 I do not scream.  I have seen my foot pointing backwards after falling off a loading dock.  I have caught a windmilling 16'-0" length of 2x4 with my face, breaking my nose.  I've passed thirteen kidneystones.  I cracked open a kidney auditioning for a play.  I have been on fire... twice.  At no time during these incidents did I ever scream in agony.  Most of the time, I didn't even yelp in pain.  Today, as the doc tried and failed to set the packing stuff into that hole in my mouth, I groaned very loudly... and I discovered what the kleenex was for as I crushed it in my hand.  He tried a second time... and the groan became much higher-pitched.  A third time.  Fourth.  Fifth.  "That socket just doesn't want to let it stay there," said the doc.  A sixth try, and not only did I scream like a little girl, I tried very hard to squirm out of the chair, down the hallway and out into the traffic on Duckford's busiest street.  On the seventh attempt to apply the pain-killing solution, he finally succeeded... by liberal application of what felt like 20d box nails.

On the plus side, there's no pain now.  Hopefully, it'll stay that way... I don't think I can take another application of pain-killers.

1 I really shouldn't want to laugh now, but you've done a remarkable job of presenting your tale of pain and suffering in amusing terms.  Well done.  And I hope the socket treatment works!  I've had some high-level tooth pain in my time, and it's never any fun, and does in fact bleed over into every aspect of your life.

2 So far so good, David.  The packing material is still in and I'm still pain-free, some 16 hours later.  Crossed wingtips, it'll stay that way.

4 I have had "dry socket" and can attest to the "mild discomfort" (doctor term) that it provides.

I needed some two or three applications of the stuff to fix the problem.  Fortunately both (or all) of them went in and stayed in on the first try.