Deep Breath... Okay.  Duck U's Spring semester textbook rush is over, more or less, so things will be slowing down there.  That means I won't be coming home from the Bookstore completely worn out and exhaustipated.  That means I should be able to actually blog on subjects that aren't fed to me on a platter (i.e., F1 Pr0n), subjects that require me to use my brain. 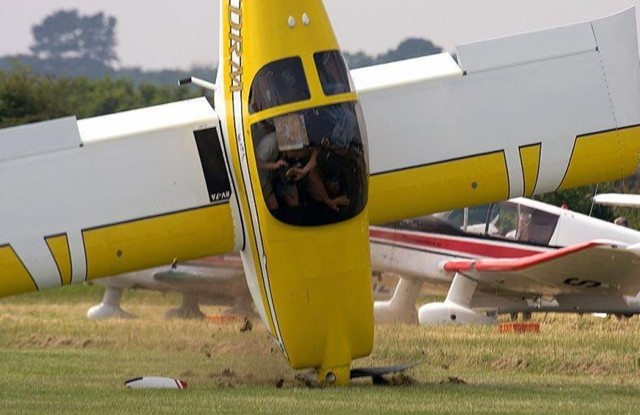 If "lucky" is the word for it.

2 Not the best way to mow the lawn.

3 Rather impressive breakdancing moves, though.

4 Indeed, it is a loss of directional control, and a great illustration to the thesis that you can ground-loop a tricycle gear airplane.

5 The captions at Airliners.net suggest that the crash of D-CDRM was a result of wheelbarreling on a soft surface, not a groundloop, as I assumed looking at pictures.

6 Here's shakycam video of the accident.

7 Wooow, I must practice soft-field technique more dilligently from now on. He clearly digged it in by braking.

8 Oh, that's an RV-7A.  A long time ago I was on the builder's mailing list.  I still want to build one of their kits someday, although the RV-6 has been superseded.

9 I don't think I could even build a Quicksilver.

10 I wouldn't want to fly in anything I built myself.