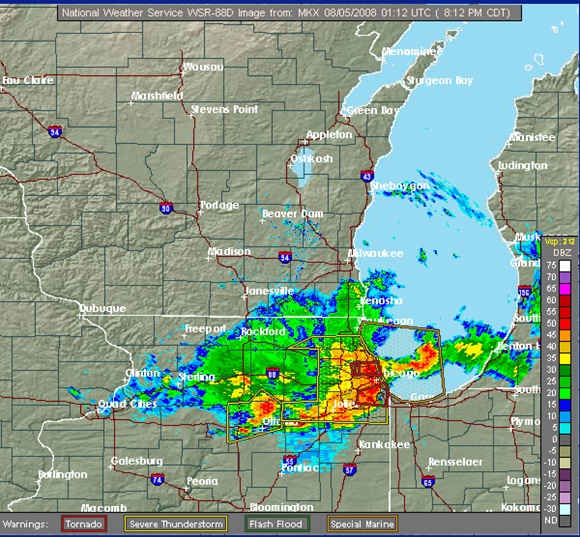 There are reports of tornadoes on the ground in the vicinity of the north side of Chicago... more specifically, in the area of Wrigley Field.  The Cubs were playing the Houston Astros tonight at Wrigley, with a full house of around 41000 people in attendance.

The storms in question came through the Duckford area, and here at The Pond, it was actually quite terrifying.  Nearly constant air-to-ground lightning strikes, and reportedly, the storm actually got stronger as it moved away to the east... towards Chicago.  The weather folks say there's about 30000 people without power in Duckford, trees down, yadda, you know the drill.  You can see the bow shape in the picture above, meaning that there's strong winds in there.

As I said, it was terrifying enough here at Pond Central... I can't imagine what it'd be like outside at Wrigley.  Let's hope everything's okay... as I typed that, the weather folks say there's reports of heavy cloud rotation near O'Hare Airport.

All is well here at The Pond, the power never even fluctuated.  Momzerduck and Ph.Duck report that they're okay, too.

UPDATE 840pm: A few minutes after I hit 'save' on this post, WGN radio, which has gone to continuous weather coverage, reported 80mph winds blowing on Michigan Avenue and heavy, heavy rain.  Still nothing heard from Wrigley, but considering that WGN (the flagship station of the Cubs radio network), isn't saying anything about it anymore, I'd say that a bullet has been dodged.  Holy crap, a weather reporter says that there were 100mph winds on the south side of Chicago, too.

UPDATE 850pm: "We've never seen anything like this at Wrigley Field before."  No tornado, thankfully, but Cory Probst, the play-by-play team's info guy, says that the rain was incredibly heavy, there's standing water on the warning track (and this after an off-season renovation of the field to improve drainage), and there's loads of debris.  Nobody's said anything about the game coming back on, and hopefully everybody at Wrigley is okay.  The worst of the weather has moved into Indiana and Lake Michigan, reportedly.  Neo couldn't have dodged the bullet any closer.

UPDATE 1025pm: The Cubs just retook the field after what must have been a miracle job by the groundscrew.  And there are still plenty of fans there, too!  The foul lines are pretty much gone, though, and I've never seen that before!

1 Hey, you're not permitted to have a storm! That's Ubu's job!